First: Some illustrations for Sagittarius-types everywhere ~ Happy Birthday Y'all!

The Centaur by Michael Parkes 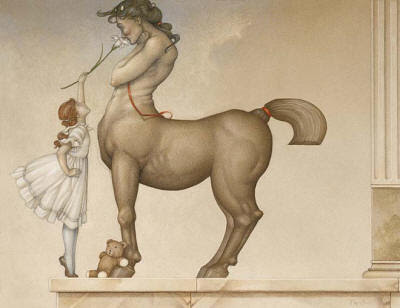 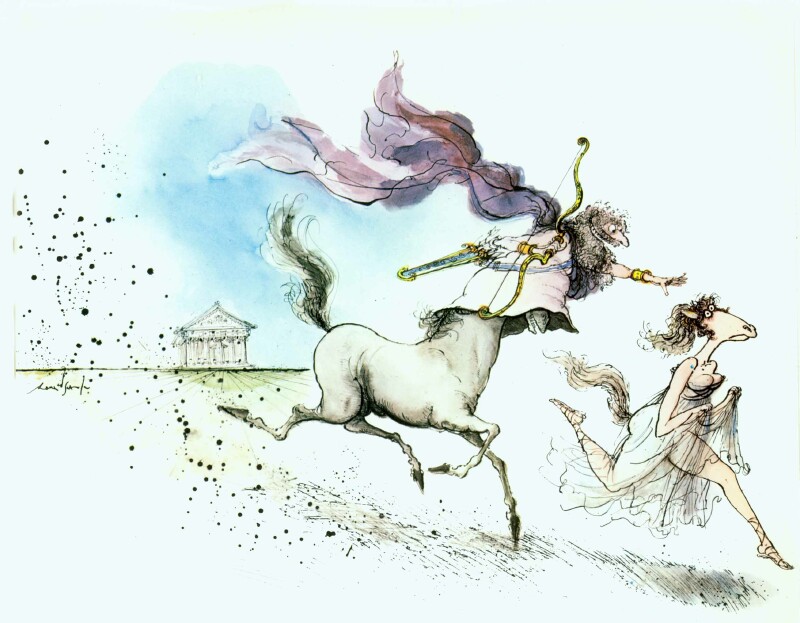 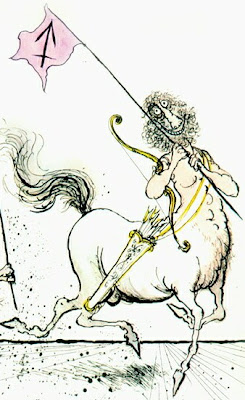 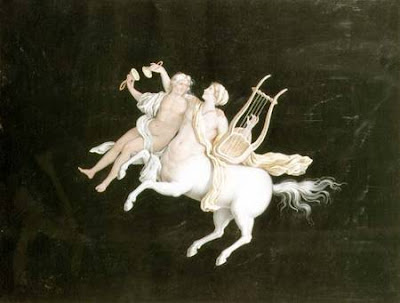 What follows is an edited version of what I came up with for Sagittarius (and sister-sign Pisces) 3 years ago. I found it interesting to read again myself, perhaps others will too. Archived posts on Sagittarius can be easily accessed by clicking on "Sagittarius" in the Label Cloud on sidebar (see right). 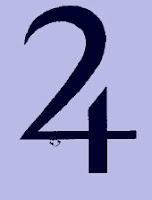 Sagittarius and Pisces are traditionally both ruled by planet Jupiter. 20th century American astrologer Carl Payne Tobey in his book An Astrology Primer for the Millions (1965) defines similarities and differences between the two.

This author focuses on something to which I hadn't previously given much thought: links between pairs of zodiac signs with a common planetary ruler in traditional astrology.

The Sun is now in one of Jupiter's governorships: Sagittarius. All Sagittarius-types qualify as Jupiter's people, as do Pisces-types - i.e. people with emphasis on these signs via Sun, cluster of planets, Moon or rising sign.

Whereas Gemini and Virgo-types (Mercury's People)are said to be linked very strongly to their nervous systems, Sagittarius and Pisces, Carl Payne Tobey tells us, are connected to

.....something beyond the nervous system, which is in some way connected to it. These signs relate to some of the phenomena, that orthodox science and academicians are afraid to investigate.The psychic powers are related to Pisces while intuition is related to Sagittarius.

Mr Tobey points out that, in modern astrological doctrine, Pisces is ruled by Neptune and Sagittarius by Jupiter. Traditionally, though, both came under rulership of Jupiter, hence some similarities.

Both of these signs have a strong curiosity about the unknown and something akin to a religious interest, although it may not be a church type of interest. The consciousness of both signs goes beyond the usual, everyday affairs of life. Survival and money making isn't enough.

Some similarities between the two signs:
They are less inclined to live by rules and regulations, not inclined to be atheists, less likely to doubt life after death, or existence in form prior to this life, both recognise the vastness of the unknown and less likely to accept what authorities say about it. Both signs like to travel and explore. Yet in other respects, these two signs are the opposite of each other.

Sagittarius is direct and to the point, outspoken with no heed for consequences-

.....plain simple honesty, the sort of thing society requests, but can't take. The Sagittarian is in a constant state of evolution. Seldom do we find one of these people who remains within the church in which he was brought up. Not easily brainwashed, truth is more important to them than loyalty to any church, family or heredity. Interested in all branches of knowledge, anything to do with hidden truth. The average Sagittarian is more jovial than other signs. If you need help he won't walk by. If you are down he will want to cheer you up, and he may then try to indocrinate you with his philosophy, not to indoctrinate you but to cheer you up and give you a better, more optimistic outlook...

Pisces is the opposite of Sagittarius in many respects. In place of intuition it is likely to have psychic powers. It may dream things before they happen. It lives partly in some other, unknown world. It can have mental and emotional problems that Sagittarius is not likely to know about, unless it has some very negative Neptunian afflictions. In place of outspokenness, Pisces is secretive. Instead of wanting to tell the truth, it will tell you what it thinks will have the best effect on you, or the effect that it desires. Nobody ever knows just what the Pisces person thinks because it never tells its true thoughts to anyone .....because it knows that society is too brainwashed to to be able to face the truth. Pisces people are sympathetic and compassionate, like Sagittarian folk they have a good sense of humour, Piscean humour is subtle though."

Whereas Pisces recognises that most moral codes are strictly phoney and born of hypocrisy, it doesn't try to change them, it goes around them and does what it wishes, secretly. Sagittarius on the other hand crusades to change the laws and is too apt to mistake hypocisy for ignorance. It can't really believe that human nature is dishonest because its own nature is not dishonest.

This post about Sagittarians is tops, Twilight! I am Aries, but Ascendant Sagittarius - and while reading (and eating some delicious "Prunes d'Agen", soaked in French Armagnac - I came to the conclusion that I am almost 100 % Sagittarian, so nice and flattering to my ego. Most obliged for a nice mental excursion.

And this while I saw the markets melting down and reading one day late what Eric Cantona has to say against bankers. If that's not a goal?! ("goolada" in Brazilian Portuguese).

PS. Beware of local banks, however. Alone this year (and only so far) over 140 were shut down in the US.

PPS. This is not anon commenting, its Gian Paul but that Google thing again is out of wack...

Having had some scruples about my crusade against Google, I tried once more - see if it works this time?

Anonymous aka Gian Paul ~~~
Hi there! Sag. is one of my favourite signs. I have only natal Venus there myself though, but its attributes seem to blend well with my Aquarius and Aries Sun/Moon.

Glad you found it complimentary!
There's not a lot that is negative about Sagittarius, apart from its tendency to exaggerate or go overboard at times, in any sphere one cares to investigate. If there are negative indications elsewhere, I suppose this tendency to excess could work in an excessively bad direction.

Re banks - yes, there are dangers with local banks. I checked a recommended website yesterday where, after typing on one's zip code a list of "preferred" banks (not of the BIG variety) with a B rating came up and it included ours. So I'll take that as being okay for the time being.

Any ideas on forecasting the British pound v. US dollar exchange rate for the next months GP?

The forecasts I've seen indicate a slight rise into December then a gradual fall for several months to come in 2011. Now might be a good time to "take my money and run".

Gian Paul ~~~ thanks for your e-mail response on GBP/USD question.
:-)

Randomly found your site via a google search and very pleased to have found it. Referenced for my daughter, who is only 3, but with words like these in our backpockets, there seems a more beautiful guide to help us through life's journey. Curious though about your astrology Annie?

Nickgonewalkabout~~ Thanks for stopping by and commenting.

Sun in pisces sagittarius rising is a very jupiter ruled combination, right? How do other view a person with combination and what are people's first impression upon meeting someone with these placements?

Hi Audrey! Well - this post is from 2 years ago. I think the best way to answer your question would be for me to put your query into its own post next week (maybe on Tuesday) and see whether anyone comes forward with opinions; in the meantime I'll think on it myself. :-) Thanks for stopping by.