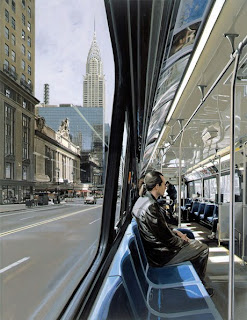 Realism and especially that genre of painting known as photo-realism isn't especially beloved by the elite of the art world, or the "hip" and "cool" of any world. I enjoy it though. I admire the work and dedication which must go into these paintings, obviously not something that could be dashed off while "under the influence" of any stimulant.
(Left: 42nd Street Crosstown Bus by Richard Estes)

Richard Estes is one of the founders of the school of photo-realism, also referred to as super- or hyper-realism. His skill is breathtaking. He was born in Kewanee, Illinois, studied art in Chicago but settled in New York, a city for which he appears to have great affection, for many of his paintings are reflections of it - literally reflections too in some cases. 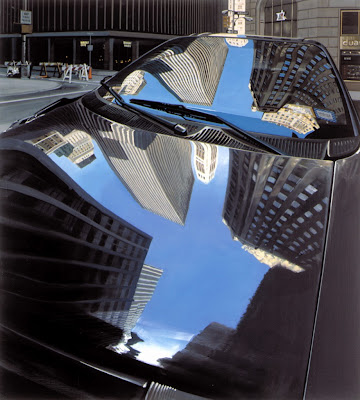 Estes' paintings concentrate on aspects of urban landscape, sometimes unpopulated, occasionally with a few figures involved. They show us New York, and other cities, in an atmosphere of almost surreal calm, taking the viewer out of the painting's extreme realism into something else entirely, if the viewer were to stop and think about it. 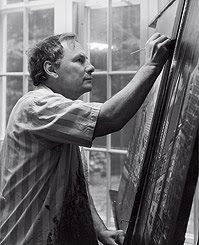 Richard Estes' paintings are based on his own photographs, though not exact copies. He takes several shots and combines them to produce something more pleasing and representative.

His technique involves shooting numerous photographs with a a tripod with a 4 x 5 camera. He then decides on the scale of the final work and does a layout drawing without the use of a grid. The basic drawing is blocked in with a diluted acrylic, its very loose, just the general outlines. From that Richard blocks in some of the lights and darks. "I find it easier to get the overall effect first, the big areas, then work down into smaller and smaller areas. In that way I'm in control of the painting all of the time. I can't finish everything individually; it has to be finished all at the same time". As the detail gets worked up Richard has been known to shift elements or add or delete them in order to get the painting to work. This stage is the underpainting stage and is followed by an overpainting stage in oil paint where everything is brought to fruition. The details get finer, the colors more accurate. The process can take many months. (HERE)

Born on 14 May 1932. Chart shown is set for 12 noon, as birth time isn't known. Moon position and ascendant will not be accurate as shown, though Moon would have been somewhere in the first half of zodiac sign Virgo. 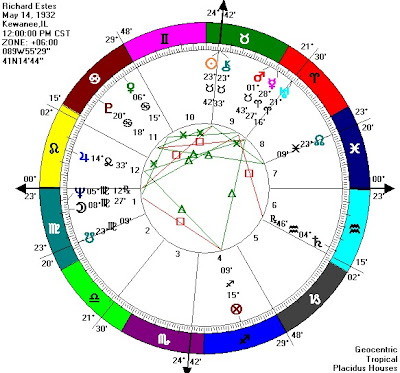 Can his attraction to realism be seen in his natal chart? Sun in Earthy Taurus, ruled by arty Venus is a start, but not enough to indicate meticulously drawn urban landscapes with multiple reflective surfaces as a frequent signature of his work.
Moon in Virgo is one link to the meticulous and down to Earth nature apparent in his paintings. How about this though?: Yod (Finger of Fate) linking Venus in Cancer (art and beauty) to Neptune in Virgo (creativity and meticulousness) in a helpful sextile, with both linked to realistic, structured Saturn in Aquarius by quincunx aspect ? I read that as an almost perfect description of what Richard Estes produces in his artwork. Artistic, meticulous and creative skills chanelled through a structured (Saturn) and somewhat intellectual (Aquarius) medium. Neptune's involvement has a double significance too - as Neptune connects closely to photography. 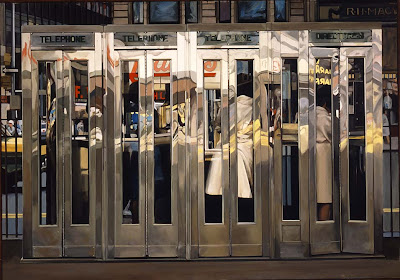 BUS WITH REFLECTION OF THE FLATIRON BUILDING 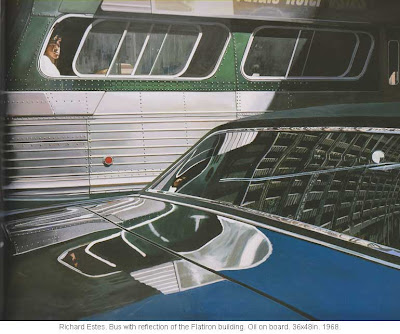 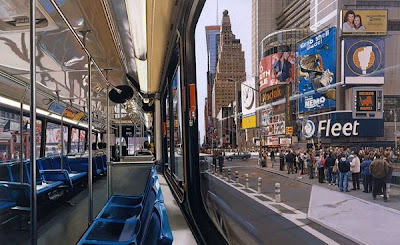 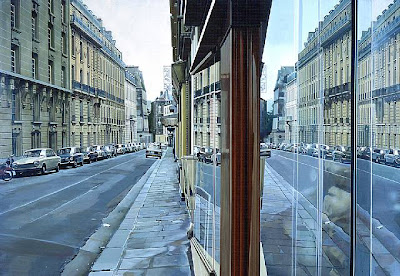 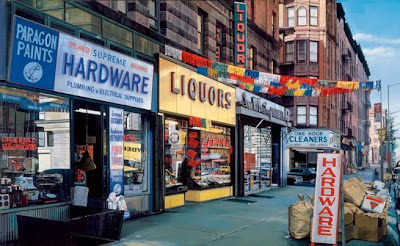 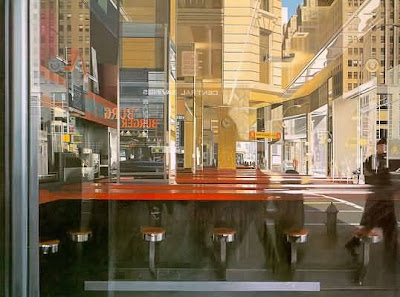 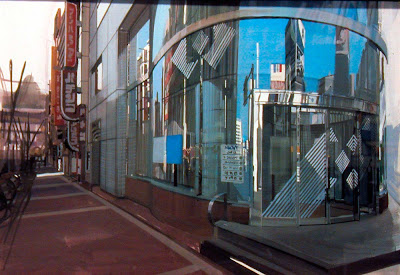 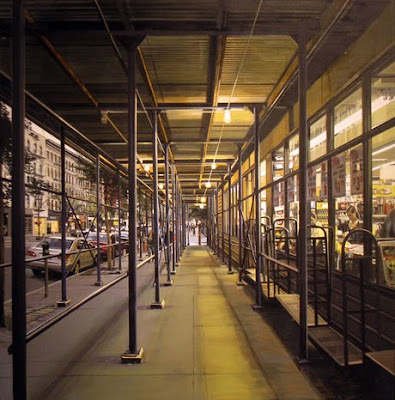 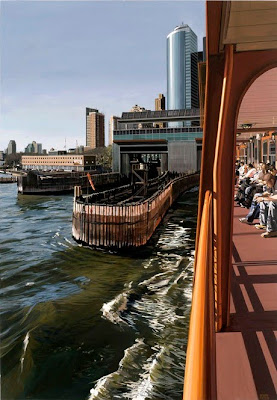 Anything that the elite of the art world don't like is okay by me :-)

I judge art by its ability to stimulate my interest. These images do just that. Some attempts at art, heralded as 'great' by the so-called elite, leave me cold. Dead sheep, or piles of firebricks, are such.

I'm with you on this T. Love his art!
XO
WWW

So pleased to see that you all agree with me. :-)

Every time I look at these images I'm more amazed at Estes' skills.