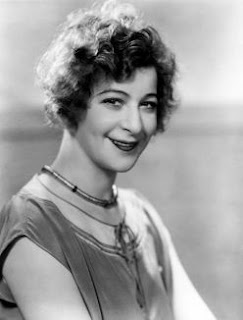 In a list of births, famous and infamous, ocurring this week in past years I didn't see many inspiring enough to get my fingers rattling the keyboard. Lots of sports people appeared in the lists though. I guess that fits Sun in Scorpio whose traditional ruler is Mars - Mars rules sport. Eventually I noticed the name Fanny Brice - it would have been her birthday today! Her name is familiar mainly because of two popular movies, "Funny Girl" and "Funny Lady" starring Barbra Streisand, and based (albeit loosely and with liberties taken) on Fanny Brice's life story.

Fanny's forté was her talent to entertain, and the ability to integrate humor into music.

The daughter of immigrant Jewish saloon owners in New York, Fanny was drawn to a life on stage early on. She appeared in burlesque revues and the Ziegfield Follies, honing her craft, developing her humor. Later, from 1930 onwards her radio portrayal of the character Baby Snooks, "a bratty toddler" brought her national fame.

Fanny married three times, each marriage eventually failed. She is quoted as saying “I never liked the men I loved and never loved the men I liked.” Her marriage to Julius "Nicky" Arnstein made famous by the movie "Funny Girl", was likely the most heartbreaking of the three for her when it ended. Another of her quotes: "With Nick Arnstein, I was miserably happy. With Billy Rose (3rd husband), I was happily miserable."

"Nicky" in real life was even more of a rogue than portrayed by Omar Sharif in the movie. He was certainly a charmer, good company, an inveterate gambler, but a criminal too, and one who managed to leech away much of Fanny's fortune. There's an interesting piece about "Nicky" HERE.

Arnstein's date of birth, other than simply "July 1879" isn't known. Natal Sun would be in Cancer or Leo. Either could account for Fanny's attraction to him. Her Watery Scorpio planets would be compatible with Cancer, and her Leo ascendant matched his possible Leo Sun. I'd not be surprised to find that he had Sun in Cancer with some personal planets nextdoor in Gemini, or Leo, or both. 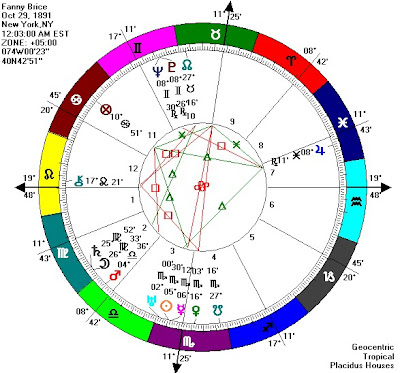 As Fanny Brice came into the world, the sign of Leo was coming over the horizon. There could hardly be a more fitting overture for this lady, whose life was to center on show business and entertaining the public. In her own words:

"Listen, kid! I've done everything in theatre except marry a property man. I've been a soubrette in burlesque and I've accompanied stereopticon slides. I've acted for Belasco and I've laid 'em out in rows at the Palace. I've doubled as an alligator; I've worked for the Schuberts; and I've been joined to Billy Rose in the holy bonds. I've painted the house boards and I've sold tickets and I've been fired by George M. Cohan. I've played in London before the king and in Oil City before miners with lanterns in their caps."

Her natal chart reveals a Scorpio stellium (cluster of 3 or more planets close together), comprising Sun, Mercury, Uranus and Venus. Now, I'd say that Scorpio Sun, left to its own devices is neither very funny nor very musical. Here though, the Sun is joined by Uranus, a planet often linked astrologically to humor, and Venus, planet of music and the arts, as well as Mercury, communication planet. Jupiter in Pisces is in harmonious trine to this Scorpio cluster - Jupiter planet of luck, expansion, publication, helping to bring Fanny's talents to a wide audience.

Fanny's natal Moon conjunct Saturn in Virgo points to a broad streak of perfectionism in her astro-makeup, and a solid work ethic.

"Brice was so meticulous about the program (Baby Snooks) and the title character that she was known to perform in costume as a toddler girl even though seen only by the radio studio audience.

Baby Snooks writer/producer Everett Freeman told Katkov that Brice didn't like to rehearse the role ("I can't do a show until it's on the air, kid") but always snapped into it on the air, losing herself completely in the character: "While she was on the air she was Baby Snooks. And after the show, for an hour after the show, she was still Baby Snooks. The Snooks voice disappeared, of course, but the Snooks temperament, thinking, actions were all there."" Wikipedia

Pluto and Neptune, two generational planets were exactly conjoined in Gemini when Fanny was born. People in her age group had a creative powerhouse to draw upon, especially if their personal planets linked to these two outer planets; in Fanny's case Mars, planet of energetic drive, was in helpful trine from Libra.

A rare sample of the voice of Fanny Brice herself: