My husband's younger son suggested that I look into the history (and astrology) of former President of the US, William McKinley. He'd been reading a book about this man, his assassination, and the next President, Theodore Roosevelt. He thought that McKinley might prove to be an interesting study.

William McKinley was born at 11.32pm on 29 January 1843 in Niles, Ohio.
I've been unable to find birth data for the assassin.

Extract from a short biography
"McKinley's presidency (1896-1901) witnessed the Spanish-American War, and a long guerrilla conflict over the United States' resulting occupation of the Philippines. McKinley was re-elected in 1900, again running against William Jennings Bryan who emphasized anti-imperialist themes. In September, 1901, while touring the Pan-American Exposition in Buffalo, New York, McKinley was assassinated by Leon Czolgosx, a young unemployed laborer and anarchist. For many Americans, in particular, this shocking news was a reminder of the deaths of two other Republican presidents, Abraham Lincoln and James Garfield. The three men's assassins had widely varied motivations, but many observers linked the fates of "three martyrs to the nation," and McKinley's assassination intensfied fears of political and labor violence."

The double chart shows William McKinley's natal planetary positions in the centre ring, with the outer ring showing transits for 14 September 1901 when he died in Buffalo NY and his VP, Theodore Roosevelt, took office. 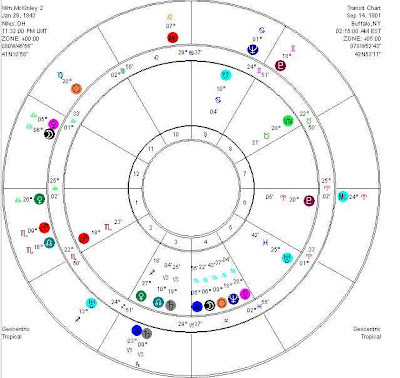 McKinley must have been a near textbook Aquarian, Sun, Moon, Mercury, Jupiter and Neptune all lay in Aquarius as he was born, Moon and Jupiter closely conjoined. Saturn in its own sign of Capricorn at 19* seems to be the key planet here though, along with Mars, also in the sign of its traditional ruler, and sextile Saturn at 18* Scorpio.

On the dates President McKinley was shot (6 September 1901 at 4.07PM) and later died (14 Sep 1901 2.15AM), transiting Saturn was at 9* Capricorn, 10 degrees from his natal Saturn, coming up to a second Saturn Return. On the day he died transiting Mars was 9 degrees from his natal Mars in Scorpio. I think most astrologers would consider orbs of 9 and 10 degrees too wide to be of significance, but I remember reading somewhere that Saturn in particular can make itself felt some time before it comes within the generally accepted orb (which I think is anything up to 8 degrees).

There may well be other significant aspects in the natal and transit charts, but these two stand out most clearly. I'm not clear whether the natal chart should have been relocated to the place of death, to see proper house positions, but for this purpose just the planetary positions show Saturn's involvement.

Astrologer Grant Lewi, in his book "Astrology for the Millions" at page 67 says:

"The movements of the Planet Saturn are among the most vital astrological details to understand in order to become the master of your fate. Saturn is the most important planet influencing the life of the great and powerful in history.......Presidents, for example, being the most powerful, show the extremes that a single force such as Saturn can have."

Mr Lewi goes on to present a list of presidents from Lincoln to Daddy Bush, with dates of their Saturn Returns and a note of what occurred for them at that time, positive and negative.

"Saturn's Return was coincidental with shortened presidential careers in the lives of Lincoln, Benjamin Harrison, McKinley, Harding and Hoover. Fortunate are those who moved into retirement before Saturn made its way back to its original position in their Vitaspheres."

The more I look into astrology, the less I understand why skeptics fail to see that "something is going on".
Posted by Twilight at Wednesday, August 01, 2007

You reminded me of the autobiography I read years back - Kirk Douglas. He said how when he'd played van Gogh he'd been completely consumed by the character and even felt possessed at times.

As a Sagittarius acting a very intense Aries I often wondered if that fiery cosmic "link" was why they connected so strongly.

Would be interesting to compare their charts perhaps? I'd love to see their Moons, given that level of intuitive/spiritual understanding.