There has been one piece of good news this week, amid the gloom.
See HERE"Pakistan's president, General Pervez Musharraf, has agreed to drop corruption charges against Benazir Bhutto to allow her to return to Islamabad as part of a power-sharing deal, the former prime minister has claimed.

Ms Bhutto, the leader of the Pakistan People's Party who lives in self-imposed exile in London, and Gen Musharraf, who is beset by challenges to his eight-year rule, are near to a deal that would pave the way for the general to be re-elected as president and Ms Bhutto to return to contest parliamentary elections."

and HERE, from Nathan Gardels
"LONDON -- By returning to Pakistan and leading her party in October's elections, the pro-American Bhutto will fundamentally alter the way the "war on terror" is being waged in this frontline state. She offered me this analysis in London on Wednesday:

There are moments in history that prove decisive and mark a turning point for the future. The American Civil War was such a moment in the United States. The fall of the Berlin Wall was such a moment for Germany and the European Union. Today is Pakistan's moment of truth. Decisions made now will determine whether extremism and terrorism can be contained in Pakistan to save it from internal collapse. The stability of not just Pakistan but the civilized world is at stake."

I've long admired Benazir Bhutto. I don't fully understand the corruption scandals which led to her exile, and somehow doubt that things were exactly as portrayed by her adversaries. Her platform was always leftist, including food for the hungry, health care, jobs, slum clearance and a monthly minimum wage. She has been opposed by Islamic fundamentalists.

I can see only good coming from her return to her homeland. She has suffered a great deal of hardship in life for the sake of her political career. See HERE for more detail and an excellent summary of her life so far. 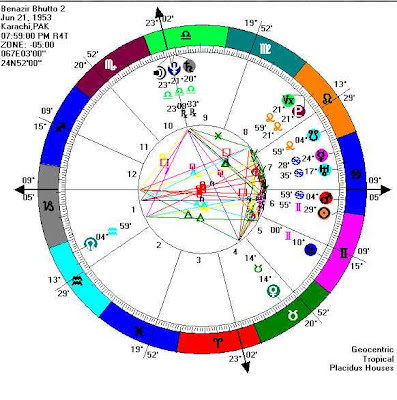 Ms Bhutto has a natal stellium in Libra at midheaven - very good placements for politician or diplomat. Three natal planets in Cancer, including Mars within 5 degrees of Sun in Gemini, Jupiter also in Gemini, and Venus in Taurus.
The mix of Libra, Cancer and Gemini indicates a beautiful blend of tact, compassion and caring with an agile mind.

The current Mars/Jupiter opposition is touching Ms Bhutto's natal Jupiter at 10 Gemini - it must surely have something to do with this turn of events?

These paragraphs give us some idea of what she has gone through in the past - the period during the summer of 1981 she describes below coincided with the transit of
Pluto over her natal Moon/Neptune/Saturn conjunction at midheaven, in Libra !

"Bhutto's persecution began in earnest after the dismissal of her father's government in 1977 and his execution in 1979 as she intensified her denunciations of Zia and sought to organize a political movement against him. Repeatedly put under house arrest, she was finally imprisoned under solitary confinement in a desert cell in Sindh province during the summer of 1981. Bhutto described the hellish conditions in her wall less cage in "Daughter of Destiny":

"The summer heat turned my cell into an oven. My skin split and peeled, coming off my hands in sheets. Boils erupted on my face. My hair, which had always been thick, began to come out by the handful. Insects crept into the cell like invading armies. Grasshoppers, mosquitoes, stinging flies, bees and bugs came up through the cracks in the floor and through the open bars from the courtyard. Big black ants, cockroaches, seething clumps of little red ants and spiders. I tried pulling the sheet over my head at night to hide from their bites, pushing it back when it got too hot to breathe."

Released in 1984, she went into exile in Britain until 1986, when martial law was lifted in Pakistan"

A quotation from this very brave lady: