"The piano on which John Lennon composed "Imagine," his famous ode to peace and healing, is on a yearlong magical mystery tour of the U.S. with a macabre twist.
The nutmeg-colored Steinway upright, believed to have been in Mr. Lennon's country home in Ascot, England, is crisscrossing the country to show up at some of the nation's most horrific sites of violence, death and destruction........British pop singer George Michael and his longtime partner, Kenny Goss, a Dallas gallery owner, are the force behind the tour."
Full article by Ann Zimmermen at Wall Street Journal on-line HERE.

I've always enjoyed George's singing. I especially like a CD of his called "Songs From the Last Century". It's been necessary to turn a blind eye to his unwise carryings-on, he has been caught in flagrante, in the glare of publicity, on more than one occasion. He hasn't harmed anybody but himself, after all, but I do feel like giving him a little slap for so injuring his reputation.

George Michael was born 25 June 1963 either in London or Bushey, Hertfordshire, UK (not far between them).

This latest news story shows George's softer, more caring side, I think. Cancer Sun and three planets in Virgo probably help to balance that other, wild side of his. Natal Moon would be in Leo, unless he was born after 11pm. Mercury and Venus conjoin in Gemini.

There are two Yods in this chart, which I suspect are quite significant, and seem be connected, complementary even.(I've drawn them in on the chart below). One has the sextile between Neptune and Mars, pointing, via inconjunct aspects to Jupiter in dynamic Aries. The other with sextile between Mercury/Venus in Gemini, and Jupiter in Aries, inconjunt the apex of the Yod at Neptune in sexy Scorpio. 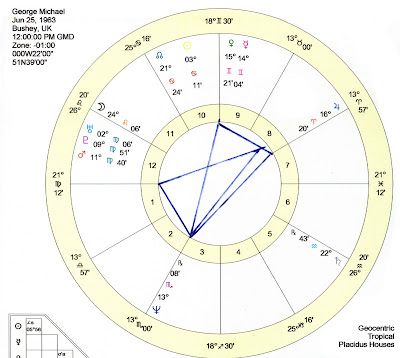 Without an accurate time of birth we can't know into which house the apex of these Yods fall, but the planets and signs involved relate to communication, publication/exaggeration, energy, love, imagination, maybe some kind of addiction (Neptune). Neptune and Jupiter feature in both formations.

Astrologer Bob Marks on his website (HERE) has this to say about Yod configurations:

The “energy” of the two planets making the sextile seems directed to the house and sign containing that third planet. The effect of a Yod is said to be “fated” or show some special destiny. Oh sure, it sounds really impressive when you tell a client “Hey, you have a special destiny!” However, that’s nothing more than a “Barnum statement” and really says nothing. All that is really going on is an emphasis on one particular area of the life. Nonetheless, this focus frequently seems driven, compelling.

It seems to me that George Michael has a compulsion related to sex (Neptune in Scorpio), which has, on more than one occasion become public(Jupiter)....are these Yods the key, I wonder?
Posted by Twilight at Monday, August 06, 2007