A few words about the late Bill Hicks will fit in well this week. I must be under the influence of the current Mars/Jupiter opposition! I've blogged about angry writers, the Johns Steinbeck and Osborne (here), about how anger is integral in human nature (here), another Aries/Saggittarius character, Van Gogh, yesterday, and now I'm looking at a chart with Sun plus 3 planets in Sagittarius closely conjunct Mars, the chart of a wonderful, angry comedian. None of this was planned, by the way. I'm just "doin' what comes naturally"! 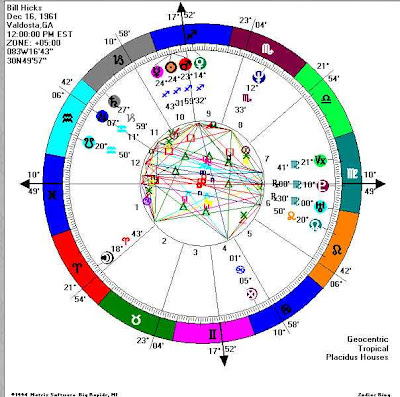 
When I first came to the USA I'd never heard of Bill Hicks, in spite of the fact that he had made some very successful appearances in the UK . Surprisingly, HeWhoKnows hadn't heard of him either. So when we rented a DVD of his, out of curiosity, soon after I arrived in the US, we were impressed - well HWK was impressed, I was well and truly hooked. We were puzzled that at the end of the DVD there was an implication that Bill Hicks was no longer with us. Searches on the net informed me that he had died in 1994, aged only 32, of pancreatic cancer. What a tragedy!

Just this week we listened on-line to an excellent BBC programme about Bill's life.(HERE). I often think about him, his views and his jokes. What would he be saying about the current situation in the USA and the world ? The air would be well and truly blue!

"Bill was part social critic, part comedian, part preacher. As he himself said, he was Chomsky with dick jokes. Hicks stripped away the lies and deceit our governments have woven for us, laying bare grim truths, laced with his biting, trademark wit. Bill's humour though sometimes harsh, was not intended to upset, more to bring people together: "The best kind of comedy to me is when you make people laugh at things they've never laughed at, and also take a light into the darkened corners of people's minds, exposing them to the light. I thought the whole point of it was to make you feel un-alone." "http://sazmatazz.users.btopenworld.com/

Four personal planets in Sagittarius, three of them very closely conjoined. Jupiter, ruler of Sagittarius in Aquarius (within minutes of my own natal Sun, by the way). You could hardly concoct a better astrological line-up to match the description above ! Add Saturn, at home in critical Capricorn and you have "the full set"!

The chart shape is "funnel" or "bucket", with the spout or handle at Moon in Aries - all that Sagittarian and Aquarian energy channelled through an impatient restless, often aggressive, Moon in Fire.

When Bill died on 26 February 1994 Uranus and Neptune at 24 and 22 Capricorn lay just 3 degrees from his natal Saturn. Those outer planets would have been hovering there throughout the time between diagnosis of terminal cancer and his death.

Another side of Bill:

The Bill Hicks Foundation is a non-profit organization dedicated to the rescue and rehabilitation of orphaned and injured wildlife, predominantly in the Austin hill country area -- an area that Bill loved. Many people think of Bill as a bitter cynic, but nothing could be further from the truth. Bill loved wildlife and was a strong advocate of fighting the overpopulation crises that threatens all of our existence.
The Bill Hicks Foundation for Wildlife Rehabilitation gives us a way to make a difference, in a place that Bill loved, and we can still belong to the "People Who Hate People Party." http://www.billhicks.org/billandanimals.html

There are several video clips from his performances on YouTube. Many are not for the delicate of ear or faint of heart! Here's a link to one that I especially enjoyed - I think it's from one of his UK performances back in the early 1990s. The more things change, the more they remain the same! Bill Hicks

Some quotes from the man himself:

"The world is like a ride in an amusement park. And when you choose to go on it, you think it's real because that's how powerful our minds are. And the ride goes up and down and round and round. It has thrills and chills and it's very brightly coloured and it's very loud and it's fun, for a while. Some people have been on the ride for a long time and they begin to question, is this real, or is this just a ride? And other people have remembered, and they come back to us, they say, "Hey - don't worry, don't be afraid, ever, because, this is just a ride..." And we... kill those people.

"We have a lot invested in this ride. Shut him up. Look at my furrows of worry. Look at my big bank account and my family. This just has to be real. Just a ride. But we always kill those good guys who try and tell us that, you ever notice that? And let the demons run amok. But it doesn't matter because: It's just a ride. And we can change it anytime we want. It's only a choice. No effort, no work, no job, no savings and money. A choice, right now, between fear and love. The eyes of fear want you to put bigger locks on your doors, buy guns, close yourself off. The eyes of love, instead, see all of us as one.

Here's what we can do to change the world, right now, to a better ride. Take all that money that we spend on weapons and defences each year and instead spend it feeding and clothing and educating the poor of the world, which it would many times over, not one human being excluded, and we could explore space, together, both inner and outer, forever, in peace. Thank you very much, you've been great."

Turning turning they are in yours blog.
I love the reading very as I would have been happy for knowing your language for being able to read yours written. Chisà how many beautiful things storys. If at least you would have written in English I could have understood something. Instead nothing!
Patience. novellistic mine blog and, IF you want to come to visit it of I would be happy… I waited for to You? 'Lina

Thank you for your visit.

I have added Babel Fish to my blog - see at the right side. It might help you.

If you first click on the title of the blog entry you wish to tranlate into in Italian, copy and paste the URL of that entry into the Babel Fish Box, that blog entry should then be translated for you into Italian (or any other language in the list offered.)

You can also copy and paste this note into the box for translation.

I hope this helps.

Lina - I tanslated part of the note above using BabelFish

Bill Hicks was himself very interested in astrology and said in one of his shows (I don't remember which one, but the transcript is in the book "Love all the people") that he was "Libra rising; the Scales". I have read a biography about him and am under the impression that Saturn in the 4th would fit quite nicely.

Where did you get the time that gives him a Pisces ascendant?

That's interesting! I must get a copy of that book.

The chart I posted is for 12 noon - I couldn't find any info. on time of birth (I think I noted that on the blog, but maybe not). So the ascendant and houses shown won't be accurate, but it gives us most planetary positions.

Libra rising, if he said so, must be correct, I'd have gone for Scorpio though! Diplomacy was not his strong suit! :-)

Bill did indeed have Libra rising. He was born at 1:18am Dec. 16th, 1961 in Valdosta, GA. NO ONE with Mars conjunct Mercury and/or Sun within 1 degree would be known for their diplomacy. His Venus was also conjunct his Mars, and his Moon was in the sign of Aries, so Mars actually plays a central role in his personality. He was a truth-seeker to the core, and a dynamic, charismatic personality, hostility and all. Anyway, all comedians are angry people! ;)

Anonymous ~ Thanks for the confirmation of time of birth/ascendant, and for the good points you've made.

One of these days I'll get around to doing an updated post and chart for Bill - this is getting dusty! :-)