I discovered this artist from an album cover among husband's collection of LPs - this one:

From notes on the cover's reverse I discovered the artist's name: Cliff McReynolds. Research ensued, along with discovery of some of his other work. 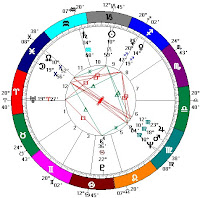 Cliff McReynolds, born on 1 January 1933, is an American visionary painter from California. In the 1960s and 70s, he was part of a loosely associated group of California visionary painters. McReynolds' works are often on canvas measuring several square feet. Some of his paintings, including The Arrival or those from his La Jolla Pentych, are composed of complicated interlocking scenes with dozens of distinct elements. (Information from HERE.)

Natal chart is set for noon and San Diego, California - which, though likely not his time and place of birth, can still give some idea of where his choice of art style is reflected: for instance, Capricorn Sun is in exact harmonious trine to Neptune, planet of visions and imagination; while Venus (planet of the arts) and Mercury (communication) in Sagittarius trine Uranus (the unusual) in Aries. Planetary emphasis in Virgo signifies his detail-oriented nature - his artwork, from what little we can glean from images online, appears to be finely, painstakingly detailed.

The Artist's Statement (in full HERE), is a good read.
Snip:


Originality was the key to a style of painting recognizably one's own and a personal style was like a prize which would only be awarded to the most sensitive, tenacious, and industrious among us. I think it was Marcel Duchamp who said, "I force myself to contradict myself so that I can avoid conforming to my own taste" For some of us, this idea became a part of the process of creating an abstract expressionist painting. In practice it worked this way: the artist would stand before his work in progress wondering what to do next (and what to do next was the everlasting dilemma). When he finally decided to act, then that would become the thing that he would not do. Imagine patting your head and rubbing your stomach while driving your car blindfolded and you will have the idea.

Like most schizophrenics, criminals or artists, I'm out of step. First century reverence makes more sense to me than twentieth century sophistication. I see imagination as a better source of art than experience. Originality seems a natural byproduct of an artist's progress toward his potential, rather than a goal.


Since my goal is art locked into the real universe, I believe that conforming to universal creative principles offers a better chance for success than ignoring or opposing them. I'm not interested in "self-expression" or "personal truth" but in truth itself, particularly in its aesthetic and spiritual dimensions. In fact I define art as the creative expression of truth.

Examples of his work:

He stated, "Since my goal is art locked into the real universe, I believe that conforming to universal creative principles offers a better chance for success than ignoring or opposing them. I'm not interested in 'self-expression' or 'personal truth' but in truth itself, particularly in its aesthetic and spiritual dimensions. In fact I define art as the creative expression of truth."

And I have to say, WTF! LOL! A pretentious statement. He has a glass of bubbly in one hand and a joint in the other as he makes this statement to impress the crowd opening night of his exhibit. Ha, ha. His Pisces Moon is bound to be opposed to either Mars, Jupiter, or Neptune. A 10* orb has his Moon opposing at least two and possibly all three planets, and maybe that's the basis of his statement, above.

BTW - You and anyjazz better have a fantastic time today, as the gates of hell have been opened and Cerberus is loose according to the haters. The comments accompanying the gay marriage equality, SCOTUS ruling have Armageddon upon us all NOW, at any moment.

mike (again) ~ That was a pretentious mouthful from the artist - yes...lol! I struggled to "get" it. Who made him the declarer of what is truth itself?

SCOTUS presented the only sensible decision - they'd have looked pretty damn silly ruling any other way- but then they obviously don't mind looking silly on occasion, if some past decisions are anything to go by.

We are taking a long weekend away from home before the worst heat sets in - northern OK this time, Bartlesville. Haven't been around this area for years, and fancied laying eyes on that gorgeous Price Tower designed by Frank Lloyd Wright once again. It houses a pricey (no pun) hotel now and a bar/restaurant (not staying there, or eating there!) and flippin' heck Hilton Gardens now has a huge hotel very nearby. The area looks more closed in now than it did when I first saw the Price Tower some 8 or 9 years ago. Other new buildings have appeared around it too. Shame on the City Fathers! The Tower is a gem.

Watching Bill Maher's show in the hotel - people are ridiculously giddy about the decisions of Scotus this week - dang, to me they were, or should have been, foregone conclusions in any civilised nation.....oh...I forgot....alright then...this is me getting giddy ;-D

Cliff McReynolds is a fantastic American artist.
His La Jolla Pentych is amazing - since he is the artist he can say whatever the hell he wants however he wants.

Thanks for posting this tribute to his work. I linked to it from my blog. Come visit!

Anonymous ~ Hi there, and thanks for your visit, link and comment.

It was only a pretentious statement because you didn't understand it! HAHA

Andy ~ That is, very likely, the problem.