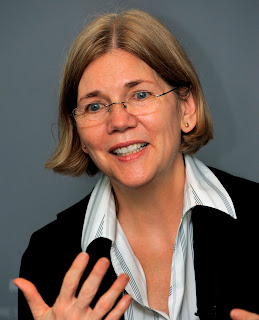 Coincidentally, one of last week's Wednesday Women was born in Oklahoma, and so was this week's subject: Elizabeth Warren. She is in the news a lot at present as a candidate to lead the new Consumer Financial Protection Bureau. The President will soon be choosing the person to fill this important post. There's much controversy, and strong opposition, from some quarters to Ms Warren's candidacy, due to the fear that she'd be too tough on the big banks and the finance industry. Fat Cats don't like to be frightened like this - they're not used to it and can scratch, claw and spit at any likely enemy.

There's a good page about Ms Warren at Who Runs Gov ~ Profiles. Extract:

Growing up in Oklahoma, a decade after drought and depression crippled the state's economy, Warren understood the value of the dollar at an early age. When Warren got sick, her mother would decide whether to take her to the doctor based on Warren's temperature and how much they already owed the doctor . "I worried about money from the time I was a little kid," Warren told Newsweek.

Warren went to Houston University, earning a bachelor’s of science in 1970. Shortly afterwards, Warren got her law degree from Rutgers University. She then taught at various universities, including in Texas, Michigan and Pennsylvania.

In 1995, she took a full-time position at Harvard Law School, where she continues to teach.

I've seen Ms Warren twice on TV in Real Time, interviewed by Bill Maher, and was enormously impressed by her down to earth attitude and sharp intellect.

David Corn had this to say on the matter in Politics Daily:

The obvious candidate for this new financial sheriff position is Warren, the Harvard law professor who first proposed such an agency in 2007 -- before the Wall Street meltdown. As head of a congressional panel overseeing the TARP bank bailout, she's been an outspoken and plain-speaking foe of Wall Street and the big banks. She has denounced shifty credit card companies and shady mortgage lenders. She deserves this position. And progressives love Warren. But Geithner may not. Last week, the Huffington Post, citing one "source with knowledge of Geithner's view," reported that Geithner was opposing Warren for this position.

My feeling: never mind the Consumer Protection Bureau -we need this woman in the White House! Take a look at her natal chart.


Born on 22 June 1949 in Norman, Oklahoma. the 12 noon chart below will not show exact Moon position or ascending sign, as time of birth is unknown. 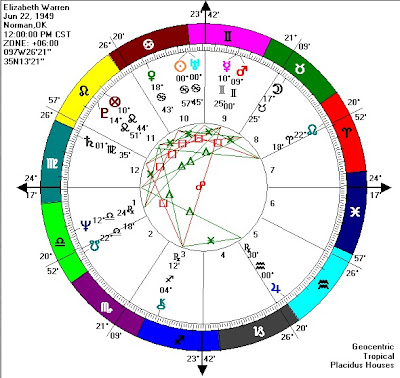 Stand out factor in her natal chart = Sun conjunct Uranus (the rebel and reformer) tightly conjoined within 12 minutes of arc, in sensitive nurturing Cancer. Jupiter in Aquarius forms a Grand Trine in Air (mentally oriented) signs with Neptune in Libra and Mercury/Mars in Gemini - an intellectual circuit!

Saturn at 1 Virgo lies in sextile to Sun/Uranus reflecting her ability to blend meticulous structured arguments with a "left-field" rebellious reformer's insight.

That's enough for me to be strongly on the side of Elizabeth Warren, in whatever capacity she chooses to progress.
Posted by Twilight at Wednesday, August 11, 2010

Entirely agree with your interpretation of Ms. Warren's map and that she is immensely competent.

Is she lucky? I gave it a check, for sports so to say:

Presently the transits on her natal map (without the birth hour, the reading is a bit less certain of course) do not indicate a big promotion:

Gave a look at Obama's map, to see if he might be a benefactor to her. Not the case, I think:

He has Moon conjunct her's (Sun would be good!). O.'s Uranus/Pluto squeeze (sandwich) her Saturn. His Neptune probably opposes her Moon and his Retrograde Saturn opposes her Venus. Only positive aspect I see between the two is O's Venus conj. Warren's Uranus/Sun.

So much for predictions. Without using astrology, Warren clearly would upset the cozy "apple-cart" in place between Geithner/Bernanke and Co. What happened yesterday with the Fed deciding to print more money arranges O. (that money never needs to be repaid, Keynes said) and Wall Street adores. It's again not going to help main-street! Sorry.

As it so happens, "synchronicity", I just saw Bloomberg News.com is carrying an article about the USA being broke, thanks largely to the various "artists" at the helm of your otherwise great country. The IMF also just said it, and Professor Laurence Kotlikoff (American, not a Russian) explains it in detail.

To give substance to what I called the cozy applecart...

Gian Paul ~~ Oh dear - that doesn't look too optimistic. Thank you for investigating her chances via transits.

If she is passed over there will be a loud outcry from the "proper left" (as against the "pretend left" which covers most Democrats.)

It'll give Press Secretary Robert Gibbs something else to whinge about when the outcry begins. He's already "the professional left" whatever he deems that to be, of being "crazed on drugs" etc. because they dare to criticise.

I count myself as "proper left", registered Independent and waiting impatiently for a 3rd party worthy of supporting to emerge. ;-)

When I read the drugs-comment by Gibbs, I had to think that next he will take on the press. Wolff who runs Newser, has written off the Obama presidency to the point that he's even getting intrigued by Palin. "Every day, he says, she's closer to become President. And earning money doing that"! But Wolff is having fun, I guess.

gian paul ~~~ Yikes! Oh well, if Palin gets taken seriously enough to be the Repub. candidate, at least we'll have a few laughs before disaster strikes!

I see Gibbs is standing by his critique, according to his remarks at today's press conference.
The White House is up to something - I'd bet on it. This was no "rush of blood to the head", but a calculated ploy. Not quite sure of the purpose of it - could one of be several things....or all of them.