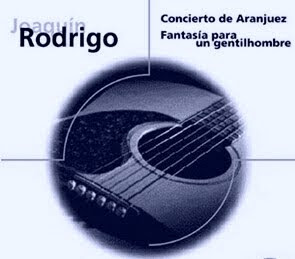 This Monday, another classical piece popularised by use in movies, or performance by artists from differing musical genres: Concierto de Aranjuez by Spanish 20th century composer Joaquin Rodrigo. This was originally a composition for classical guitar and orchestra, written in 1939. The Adagio is best known, easily recognizable, and used in several movies, television shows, and commercials. Many will have heard the Adagio from Concierto de Aranjuez without knowing its title or composer. I never tire of listening to this piece. I have a home-compiled cd containing 7 or 8 different versions, one after the other - I love 'em all! 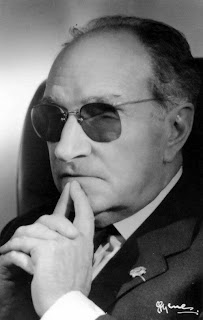 Joaquín Rodrigo was born in Sagunto, Valencia, Spain on St. Cecilia's day (St. Cecilia is patron saint of music): 22 November, in 1901. His only daughter, born 27 January (so was I) is named Cecilia too, almost certainly after the saint. At age three Rodrigo lost his sight almost completely, the result of an epidemic of diphtheria. He confirmed that this event undoubtedly led him into music as a profession.

Rodrigo's natal chart (below)doesn't initially shout "composer!" to me. I wonder, had it not been for the diptheria and subsequent blindness, whether he'd have been more likely to follow some other career path? Outside circumstances ought always to be taken into consideration in tandem with astrological indications.

His Sun and Mercury in Scorpio indicate a passionate nature, but the stellium (cluster) in Capricorn linking Jupiter, Saturn and Venus lends a stern air of no-nonsense to the chart, with Saturn's limitations modifying Jupiter's urge for excess. Mars and Neptune were in opposition from the last degree of Sagittarius and first degree of Cancer, which again reflects some kind of challenge to creativity. I don't usually mention Chiron, but here it could be of of note that Chiron, asteroid known as "The Wounded Healer" is opposing Neptune along with Mars, making this opposition even more significant, bearing in mind Rodrigo's early illness and blindness.

Moon would be in Aries, whatever his time of birth. With both Sun and Moon signs ruled by Mars Rodrigo was equipped, temperamentally, to deal with all challenges his life brought to him. He appears to have done so, with great success.


12 noon chart shown as time of birth is unknown. 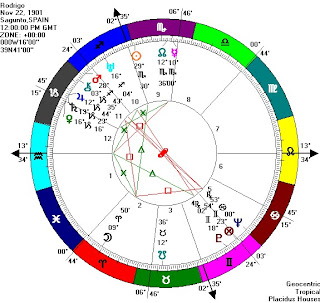 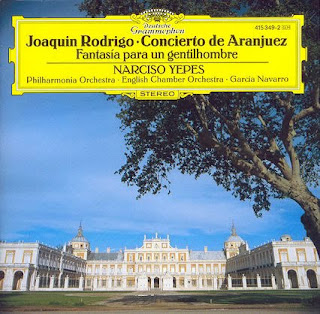 The Concierto de Aranjuez was inspired by the gardens at Palacio Real de Aranjuez, the spring resort palace and gardens originally built by Philip II in the last half of the 16th century. The work attempts to transport the listener to another place and time through the evocation of the sounds of nature. (Wikipedia)

Link to a classical version played by John Williams. Among the many musicians who have interpreted this piece, possibly the most surprising was jazz legend Miles Davis in collaboration with arranger Gil Evans. (Link to this at YouTube) It forms part of the famous 1960 album Sketches of Spain. Miles Davis said: "That melody is so strong that the softer you play it, the stronger it gets, and the stronger you play it, the weaker it gets." 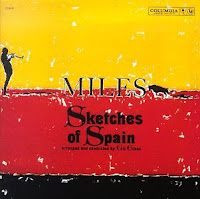 Other versions include those by famous violinists, clarinettists, The Modern Jazz Quartet and other jazz combos, classical guitarists, and easy listening orchestras. Lyrics have been added - Egyptian born Greek singer Demis Roussos used the music for his song Follow Me. In 1967, the French singer Richard Anthony brought out a single named Aranjuez Mon Amour, with lyrics by Guy Bontempelli. Il Divo sing a version too. The Shadows released their take in 1979" Rodrigo's Guitar Concerto. 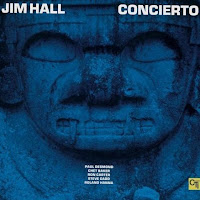 In the film School of Rock, it can be heard when the children are playing in music class. In Brassed Off it was played by the Grimethorpe Colliery Band. In that film, the concerto is sometimes referred to as "Orangejuice". Plain-spoken Yorkshire folk would be inclined to do that. It's one way to get their tongues around unfamiliar words.

Away from popular music, some Jewish cantors, specifically of Sephardic tendency, have adopted the main melody from the Adagio for the Kaddish, one of the most important parts of the Jewish liturgy. This can be seen especially in Sephardic congregations of Latin America (Mexico and Argentina), as well as in Israel. The phrasing of the Kaddish verses corresponds almost perfectly to the phrasing of the Adagio, resulting in a surprising religious effect and tone color.

Of all the beautiful renditions of Aranjuez available on video, from classical through middle-of-the-road to jazz-inspired, I've picked the one that made me weep as I listened and watched the images. Reading comments afterwards, it appears that I wasn't the only one. It's the "Orange Juice" version by Yorkshire's Grimethorpe Colliery Band, featured in Brassed Off, with images of Yorkshire and from the British miners' strikes in 1984/5. Dark days. Many in Britain will never forget them. A way of life for a generation of brave men was lost then, as the Conservatives' economic policies closed coal mines around the country in favor of nuclear power. Our strong support for the miners meant exactly nothing to demon Prime Minister, Margaret Thatcher. I still cringe at the thought of her - to this day! Nowadays coal mines are not the way ahead, but for decades we depended on what those men risked their lives to provide.

I believe Rodrigo would be pleased that this music can still help to evoke strong emotion.

Highly evocative, Twilight. I haven't seen that version before. Usually, whenever I listen to the piece it transports me back to my early Spanish holiday destinations. I well remember the times portrayed in your video, though, and those lovely Dales I've walked more times than I care to remember. Thatcher and Reagan were symbolic of all that was wrong with the world in those dark days. Yet, there are still many who can't see it.

RJ Adams ~~~ Me too - re early Spanish destinations on our hollies....Costa del Sol an' all that.

Those dark days of the strikes solidified my left-wing leanings a lot.

I found a VCR tape of "Brassed Off" for a couple of dollars on-line today - it'll be nice to watch it with a glass of Scotch, with Himself, and get all nostalgic for Yorkshire,
;-)

Ah Brassed Off and the Cornet playing the Concerto de Orange Juice...brilliant movie. Enjoy and the Scotish firewater too!

Rossa ~~~ We enjoyed the movie yesterday evening. I wondered whether my husband would "get it". For the most part, he did, with the help of one or two translations by his Yorkie wife.
:-)