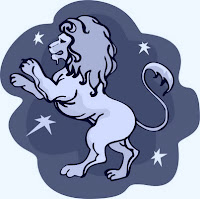 Painters and photographers born when Sun was in Leo are pretty thin on the ground. I suppose all good Leo Suns are busy doing stuff in the spotlight instead of spending their days hidden away, painting in some remote studio, or standing behind a camera putting the spotlight on others.

There were a couple of French painters in the 18th century, both born 14 August, and father & son: Claude Joseph Vernet (1714) and Antoine Charles Horace Vernet (1758). Their paintings, though masterly, weren't anything out of the ordinary for the period, so these artists don't make interesting blog subjects.

In the absence of interesting painters born under the sign of the lion, a look at painters who put lions into art.

There are numerous wildlife artists from the 20th century who have produced beautiful paintings of lions, but their full birth data isn't online. One of these, Simon Coombes, born in England in "June 1940" (so either Sun in Gemini or Cancer) lived much of his life in Africa, died in December 2004 as a result of being gored by a wild buffalo.

This is one of his lion paintings. 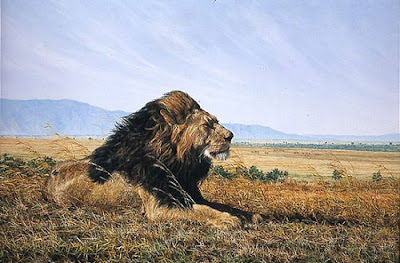 Una, is a character from The Faerie Queene, an incomplete English epic poem by Edmund Spenser. Una is the personification of the "True Church". She travels with the Redcrosse Knight (who represents England), whom she has recruited to save her parents' castle from a dragon. She also defeats Duessa, who represents the "false" (Catholic) church and the person of Mary, Queen of Scots, in a trial reminiscent of that which ended in Mary's beheading. Una is also representative of Truth.(Wikipedia) 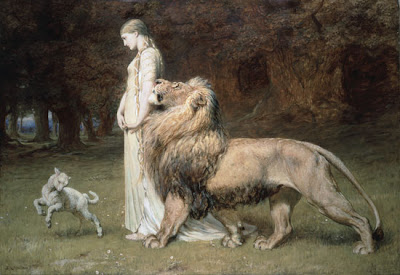 Artist of the 19th century French Romantic School, Ferdinand Victor Eugene Delacroix featured lions in a few of his paintings. One depicts a lion tearing its prey to pieces, which doesn't appeal to me, but the watercolor of his shown below is beautiful.

Delacroix was born 26 April 1798 in Charenton Ile de France. He had Sun conjunct Jupiter, and Mercury in Taurus, sign ruled by Venus, planet of the arts. Sun conjunct Jupiter (planet of expansion and travel) links nicely to his love of travel, which led him to Africa, and, no doubt inspiration for his paintings of lions. From the Daddy of 'em all: sketch of a roaring lion by Leonardo da Vinci - another Sun in Taurus painter (and the rest). Natal chart available at Astrodatabank. 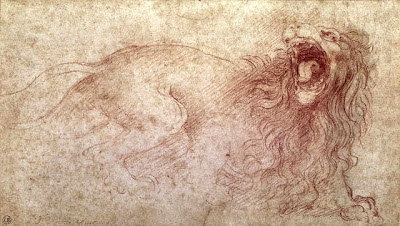 The goal of physiognomy is to judge character according to features of the face. LeBrun studied the lines linking different points of the head in a complex geometry which revealed the faculties of the spirit or character. Thus, the angle formed by the axis of the eyes and the eyesbrows could lead to various conclusions, depending upon whether or not this angle rose toward the forehead to join the soul or descented toward the nose and mouth, which were considered to be animal features.(See here). 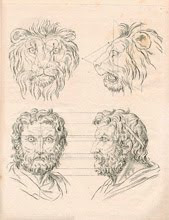 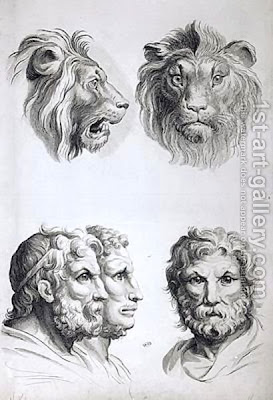 Finally, back to the stars with Bill Stephens , digital art and and:
The Creator. 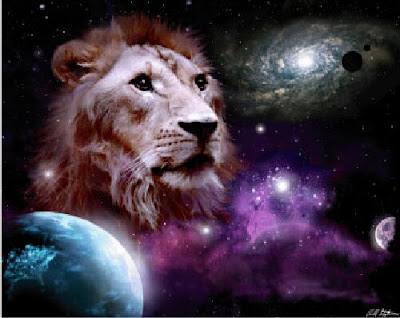 Aw, I'm a photographer and I'm a Leo. Ha!
But you got me thinking on that, T, as I personalize my pics with the poems I write (look at me! look at me!)
XO
WWW

My Leo Dad is a photographer too so there are some that like to create a picture.

WWW~~ My tongue was in cheek as I typed the bit about photographers. ;-) It was a "cheap shot", I guess.

Himself has Leo Moon and Leo rising and never goes anywhere without his camera, spends hours on Flickr each day.

Rossa ~~ See comment to WWW ~ I was being a tad facetious. ;-)Stereotypically, Leo does lean towards the spotlight though, and photography is kind of opposite to that - putting others, or other things, into the spotlight.