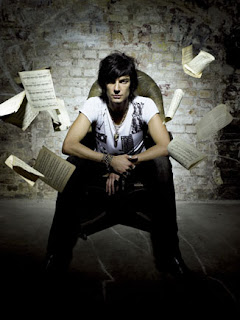 While looking for video presentations of classical music which in later years became popularised by song or TV ads, I stumbled across a pianist new to me. Maksim Mrvica. He was born in Croatia and now divides his time between Croatia and London, when not on tour. What I noticed from many of the videos of his performances available on YouTube: he immediately reminded me of Adam Lambert (below, right). One commenter had also noticed this and remarked that he's "the Adam Lambert of classical music". That sent me searching for his birth data. 3 May 1975 in Sibenik, Croatia.
Maksim's own website carries his biography, as does Wikipedia. 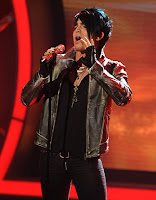 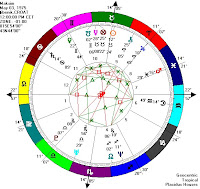 Sun in Taurus instead of Aquarius as in Adam's nativity.

But wait! In a 12 noon chart Maksim's natal Moon is at 14 Aquarius, so whatever time he was born Moon would be in Aquarius - somewhere between 8 and 20 degrees. Adam's natal Sun is at 9.55 Aquarius. Perhaps the similarity I notice is that Aquarius/Saturn look I've seen quite often in men with emphasis on Aquarius in their natal charts. Doesn't work the same for women though. Additionally, there's the need for overtly modern (Aquarius) styling which both guys display.

And the piece of music which led me in Maksim's direction: Rachmaninoff's Rhapsody on a theme of Paganini -18th Variation. 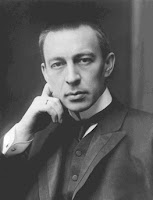 Sergei Rachmaninoff was a Russian-born composer who, later in life, became an American citizen. A pianist with a powerfully aristocratic presence, remembered for creating some of the world's most extraordinary piano works. He was also an accomplished conductor and performer. Born in Russia on 20 March (old style) 1 April (new style) 1873. Astrodatabank has used 2 April for a reason unclear to me. Whichever is correct, Rachmaninoff's natal Sun was in Aries, Moon in Gemini, Venus the musician's planet in it's sign of rulership, Taurus. He saw himself as a composer, first and foremost, performing only to further his reputation. In the USA, following the Bolshevik Revolution, he pursued the career of virtuoso pianist simply to earn money to buy food.

Rachmaninoff wrote his Rhapsody on a Theme of Paganini in 1934. It has been adapted for use in several ballets, and used in at least seven movie soundtracks:

Maksim Mrvica, "the Adam Lambert of classical music" plays the piece with a touch of modern styling. Purists will possibly not like this as much as I do.


For purists: Arthur Rubinstein plays it:

"Purist" in terms of who listens to music, especially Rachmaninoff, may be exagerated. But if there is a choice to listen to Rubinstein interpreting - it's "no other choice"!

Perhaps traditionalist or classicist would have been a more accurate term? Can Rachmaninoff not be termed pure then? Maybe because he is using Paganini's theme in this instance?

I need to have my calssical music with a sprinkling of "sugar" or a spicy dressing. I soon tire of the original, beautiful as it is, I like the fact that it can be tweaked to appeal to (me and) a new generation. This is what helps to keep it alive and thriving I think.

I adore Adam Lambert, and Maksim is cute, but Rubinstein rules. Now there's flawless musicianship - playing that ebbs and flows with the cosmic tides and expresses profound emotion. Maksim's performance substitutes cheese for genuine feeling. Adam Lambert at his best is the Rubinstein of pop.

"Vive la difference", Juneau ! I respect your opinion, but it is just that - opinion. It's not possible to dictate taste. Taste changes, like fashion, with the decades. I believe it's better for some musicians to take what was best from earlier times and adapt it. The best of music is adaptable to a variety of styles - that, I think is the benchmark of good music, not being hog-tied to one specific way of presentation.
(Remember Adam Lambert and "Ring of Fire"?)

One person's "cheesey" is another person's "Wow - goosebumps!"

As for Adam - I've been a fan since his first song on American Idol (there are several posts about him accessible from the Label Cloud in the sidebar at right.) I don't think we've seen the best of him yet - not nearly. But we will!