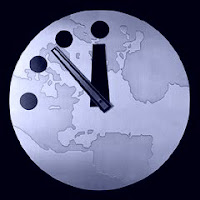 The Eve of Destruction, Billboard No 1 hit in 1965, was played by Tim Rice the other day in his current BBC Radio series. The shows feature musicians from, or songs about, some of the 50 states of the USA, state by state. Oklahoma was up - so I listened on the i-player. Oklahoma-born Barry McGuire's version of the hit song was on the playlist. 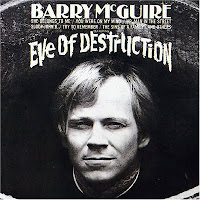 The song was always a favourite of mine, way back when, in the 60s, the big guns at BBC censored it from their airwaves as being unsuitable for the delicate ears of their listeners. Barry McGuire sang the song and sang it very well. Real credit for Eve of Destruction ought properly go to its writer, P.F. Sloan, a prolific songwriter for many famous names of the 60s. On his website Mr Sloan tells how he came to write the song. 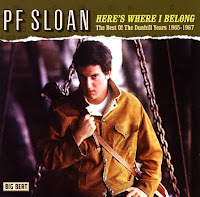 The song "Eve of Destruction" was written in the early morning hours between midnight and dawn in mid-1964......... I was 19 years old. The most outstanding experience I had in writing this song was hearing an inner voice inside of myself for only the second time. It seemed to have information no one else could've had. For example, I was writing down this line in pencil "think of all the hate there is in Red Russia." This inner voice said "No, no it's Red China!" I began to argue and wrestle with that until near exhaustion. I thought Red Russia was the most outstanding enemy to freedom in the world, but this inner voice said the Soviet Union will fall before the end of the century and Red China will endure in crimes against humanity well into the new century! This inner voice that is inside of each and every one of us but is drowned out by the roar of our minds! The song contained a number of issues that were unbearable for me at the time. I wrote it as a prayer to God for an answer.

The lines:
"Think of all the hate there is in Red China then take a look around to Selma Alabama.
And marches alone cannot bring integration when human respect is disintegrating"
are about racial un-harmony issues.

"Hate your next door neighbor and don't forget to say grace",
simple hypocrisy but it made me feel angry.

"You're old enough to kill but not for voting"
was about the injustice of using youth in the army to defend the country but they had no say in its policies. More hypocrisy!

"You don't believe in war so what's that gun you're toting!"
Okay!

"The pounding of the drums the pride and disgrace"
were written in relationship to the powerful Kennedy assassination. 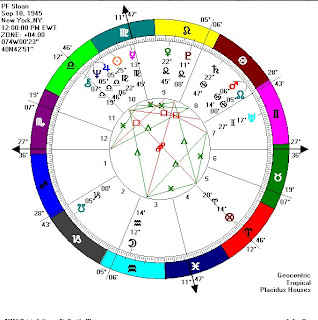 Without a time of birth Moon's exact degree can't be established, but it would have been between 5 and 19 degrees of Aquarius and quite probably forming a harmonious trine aspect to Aquarius's ruler, Uranus in Gemini. Both Aquarius and Uranus connect to social conscience, radicalism, rebellion and futuristic thinking. I'd guess that the Moon's position had a lot - in fact everything - to do with the subject matter of P.F. Sloan's hit song. Lyrics are shown at end of this post. Mr Sloan's natal chart also reveals Sun and Mercury in Virgo (ruled by Mercury the writer's planet); Jupiter and Neptune tightly conjoined in Libra (sign ruled by Venus planet of the arts), indicating expansive creativity, imagination, and perhaps a feel for philosophy (Jupiter in Libra). 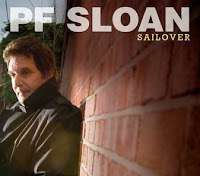 P.F. Sloan's 2006 album Sailover contains the song with re-worked lyrics, according to this THIS USA Today article, which also mentions that Sloan spent most of the past three decades battling mental and physical illnesses. Barry McGuire, now a Born Again Christian, has also recorded some up-to-date lyrics, not sure whether these are different from those on Sailover. See them at THIS website.


We were not, as it turned out, on "the eve of destruction" in 1965, and we're not now. Even so, it's very useful to have these lyrics repeated, "again, and again, and again, my friend"......because if we don't get our act together quick-sharp, we could well find ourselves on that dreaded brink - unexpectedly.

Sticking with P.F. Sloan's original lyrics and the Billboard No 1 hit version by Barry McGuire:

Further information available on both the songwriter and the song at Wikipedia.

As true today as it was back then, I always loved the song and wondered about the writer. No surprise he has had mental troubles.
"Eve" being a relative term, T.
XO
WWW

another great story, twilight,
barry has mars in conjunction to the node too and this aspect in his chart may amplify the themes of his hit song.
he had a lot to say about war and injustice as this planetary pair is in square to his conjunction of jupiter, neptune and chiron, illustrating how the war clashed with his ideals.
these voices that he heard may have been borne from this inner conflict.

There is quite a good rendition of (part of) the song in the filmed version of "The Stand" by Stephen King. I don't always like S King's work, but I did like "The Stand" a lot - and I am talking about the long version of the book!

Good point about "Eve" being used in a relative fashion. :-)

Shawn ~~~ Yes (though a wee correction to your comment - it's not Barry's, it's P.F. Sloan's chart - he wrote the lyrics, and presumably had the thoughts and emotions behind the song).

No doubt those astrological factors you mention had a lot to do with his ongoing inner tnesions which probably led to physical illness as well as mental stress.

Vanilla Rose ~~ Is there? Yes, I can see how the atmosphere of the song might fit in with a King theme.....unrelenting doom !

Wunnerful to see P.F. Sloan getting some recognition. He's a favorite songwriter of mine and actually a pretty decent performer. But he's been content - like some others from the early '60s folk and folk rock scene - to just remain in the background and let others bring their songs to the masses.

He wrote the song "Everybody's Talking" and several others like "The Dolphins" that other artists have turned into hits or familiar album cuts. Was once in the middle of the folk scene in Greenwich Village and was an inspiration to Dylan, Richie Havens, John Sebastian, Tim Buckley and others. But about the time he was beginning to become a national figure, Fred gave it all up, bought some island land in the Caribbean and basically "dropped out."

TNPOTUS ~ PF Sloan did seem to have joined the legions of the lost, didn't he? Perhaps due to his years of mental and physical problems, or maybe just that he prefers to be in 'the backroom'.

Thanks for the tip - I love "Everybody's Talkin'", yes, I think I mentioned it when writing about Nilsson Schmilsson on 14 June, but didn't mention Fred Neil's name, only that it was a song not written by Nilsson. I'll watch for FN's other songs in future.
:-)

"The Stand" starts with nearly everybody in the world dying, but apart from that is quite cheery. Okay, not quite cheery. But not as depressing as it sounds. The DVD/video version (I think it was made for TV, it would be very long for a film) has Laura San Giacomo in, which was a plus for me.

Vanilla Rose -sorry for delay in responing - been away.

Hmmmm thanks. - The Stand sounds to be right "up our street". :-) Will try to find the DVD(s) - I actually prefer TV series and mini-series to movies, so that's a plus!