Sometimes I feel I'm led to topics for the blog in mysterious ways. I'm not sure whether these stem from intuition, chance, or simple serendipity. Who knows?

As I mentioned on 28 January, my post about a pop song "Human" has generated more hits than any other on this blog. Another song has been tapping on my subconscious for a couple of weeks now. It's being played every day on morning BBC record shows to which I regularly listen on-line. The Song? Morrissey's "I'm Throwing My Arms Around Paris". Initially, I decided the song is about a guy whose lover rejected him, so he hopped over Paris as a treat, to get over the pain of loss. Simple enough. But there's more.....or is there? 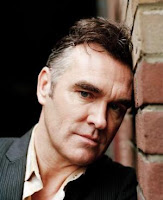 Morrissey isn't a singer to whose work I've ever felt drawn, though his name is familiar from my days in the UK. He was part of the British group The Smiths, back in the day. When I look at photographs of Morrissey I don't see a singer or a pop artist, I see someone who might sell me a new fridge, or who might man the reception desk when we take our car in for service. That seems like a daft thing to say, but it hits me every time I see his image.

Stephen Patrick Morrissey was born May 22, 1959, in Manchester, England. I do wish I had a time of birth, but I don't, so the chart below is set for 12 noon. 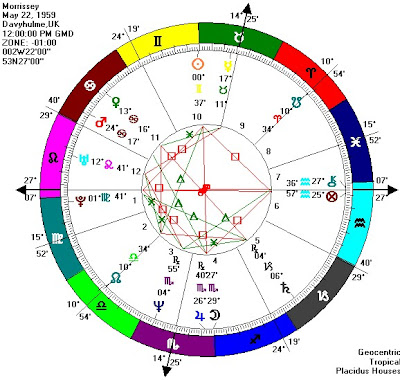 We can't know his rising sign or exact position of natal Moon. If Morrissey was born 1pm onward his Moon would be in Sagittarius, an earlier birth time puts it in the later degrees of Scorpio. I'd go for the latter.
I'll not spend too much time on the chart. A few salient points: Sun is in the first degree of Gemini - the sign of writers. That doesn't lie. He started writing at an early age, a fanzine, letters and many articles. Later he turned to songwriting. Natal Mercury in Taurus (ruled by Venus planet of the arts and music) possibly propelled him in that direction. 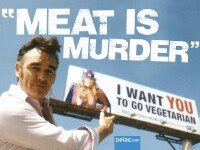 He has the reputation among his peers and fans of being something of an enigma (as far as his sexual orientation is concerned ), a tad difficult, scratchy, hard-edged. There have been accusations that there's racism in some of his lyrics, even though his politics would seem hard-left. I suspect his natal Moon was pretty close to being right opposite his Sun, which would account for a seeming polarity in his nature, but in any case Jupiter opposes his Sun and Pluto squares it, both these aspects smack of inner conflicts.

Back to those lyrics "I'm Throwing My Arms Around Paris". There's something of a debate going on among his fans as to their source and meaning. Some consider there's a connection to a rare syndrome where people (mostly women) turn their love and sexual feelings on to inanimate objects. Message board conversation on this subject HERE.

Apparently there is a woman who has fallen in love with the Eiffel Tower, another whose amorous attention is given to the Berlin Wall. An article in the UK's Independent refers to the syndrome. 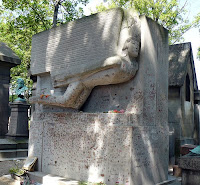 Other fans see a link to Oscar Wilde in the lyrics. Wilde returned to Paris after a spell in prison as a result of his homosexuality. He died in Paris, his tomb, designed by Jacob Epstein, is shown in the photograph. Morrissey is known to be a fan of Wilde.

There are other, less likely theories as to the lyrics' meaning, too. How about a (somewhat contrived) astrological link ? Pluto (planet of, among other things, sex and the erotic)recently moved into Capricorn (sign of structure, institutions, rigidity). Yes, I know - it's stretching it a bit, but there is a link between sex and stone and steel there!

Once again, as in "Human", a clever songwriter/performer has hit upon lyrics which have a number of interpretations, depending on the experience and knowledge of the listener - rather like an abstract or surrealist painting. This is a very welcome trend: pop music for the thinking listener?

What first attracted me to the song is the rather dramatic melody direction at "Only stone and steel accept my love". I find that the addictive point.

Funny you should say that, T about the fridge guy. He always reminds me of many of those farmers in West Cork who hung over the gate having a smoke while the dogs herded the cattle or the sheep.
He just never looks real when he's performing, as if he wants to be somewhere else.
Maybe that's the gig.
XO
WWW

WWW ~~~ I don't know any Cork farmers, but I can well imagine their faces! A few Yorkshire farmers have that same look too.

He has the face of a "working man", rather than an artist I think. I wonder if he has Capricorn rising.

Wow, people wouldn't say morrissey looked like a fridge salesman here but then we aren't racist assholes towards the irish either.

I think he's always been gorgeous. I'd rather look like a farmer from Cork that a chinless, british fatso with crowded rotten teeth. What the hell is wrong with your gene pool? Is it inbreeding? I'm never shocked to find out that the best looking british people are actually Irish.

This astrology article is utter drivel. You don't know shit about any of the subjects you so artlessly threw together.

Anonymous ~~ The commenter who mentioned Cork farmers is actually Irish, as it happens....and I do believe she hails originally from Cork.

In fact I look on it as a compliment to say that someone doesn't look like a pop star. If you took it as an insult, then that is your problem.

This is a blog - a personal, not for profit blog - not a text book or blog of a professional astrologer. If you disagree with anything I've said about the guy's astrology, then you are at liberty to discuss it and argue- but you obviously are ignorant of that subject.

The post is about the song, basically, not the man - I liked the song, I don't dislike the man.