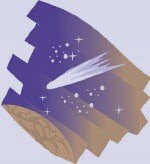 I understand that round about now Comet Lulin (or is it Lu Lin?) is travelling at its nearest point to Earth, close to Saturn in Virgo, and close to the ecliptic. Nobody has any clear idea what astrological significance comets have; as each one passes we watch and wait, and hope a pattern emerges.

Traditionally comets have had a somewhat doomy reputation, often connected to the death of kings or leaders. I wonder whether this came about coincidentally, because it just so happened that a king once died while a comet was observable in the skies. Perhaps on more than one occasion someone prominent in public life shuffled off this mortal coil along with a comet's passing. Well, there are and were lots of kings and leaders in the world at any one time, many in their senior years. It doesn't take much imagination to see how that idea might have been born.

A medieval painting (1456 AD) shows a comet and ill-effects quite clearly: weather disruption, death, sickness. Again, whether connected to the comet or some other (astrological or different) reason isn't known. 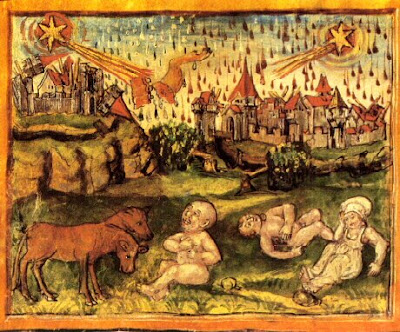 Medieval Painting Dated 1456 AD, Near A Pass Of Halley's Comet.

Prophets and mediums throughout the years have come up with visions and predictions of doom and gloom; on occasion they, or their listeners have sometimes linked these to asteroids or comets striking the Earth, setting off all manner of disaster. It's not out of the question that this did happen in the very distant past, and could one day happen again. I don't, though, think that any prophet's proposed dates for the events are to be relied upon.

For the strong of constitution there's a website on the subject of predictions of disaster-by-comet HERE. I was particularly interested in the chapter on Mother Shipton (1488 - 1561) and her prophecies which some would try to say can be linked to disasters still to happen. She was a prophetess (some called her a witch) who lived in Yorkshire - my home county in England. 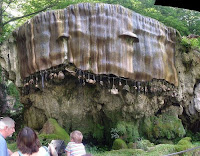 People, over time have left small objects (children's shoes, hat, gloves, etc.) hanging under dripping water near the cave, and due to a heavy dose of minerals in the water, the objects have turned to stone. I visited the cave several times, long ago with my parents.
I recall that my grandmother, also a Yorkshire woman, had an old postcard with some of the Shipton prophecies printed on it. She kept it carefully preserved in her dressing table drawer. A few lines from the card I still remember

"Around the world thoughts shall fly,
in the twinkling of an eye....
Iron in the water shall float
As easy as a wooden boat;
Gold shall be found, and found,
In a land that's not now known".... there was more. 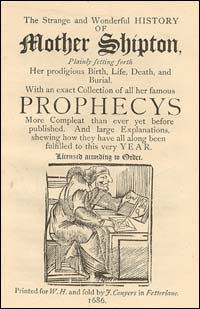 Some sources on the net propose that the whole thing, including Mother Shipton's existence, is a hoax. That, I believe is untrue. I do think though that additions have been made to her original prophecies in more modern times - there lies the hoax.

At a website presenting information from a detailed investigation of the Shipton story, carried out in 1881, here a name familiar to astrologers crops up: William Lilly. He "makes no question that Mother Shipton existed, and says that in his time the authenticity of her prophecies was undisputed. He had means, which we in modern times have not, of drawing a conclusion, and altogether it is tolerably certain that Mother Shipton had an actual existence."

The conclusion, from study of unimpeachable sources, available in in the British Museum, was that Mother Shipton's prophecies were fulfilled before the middle of the 17th Century. That tends to cancel out any present-day doom-mongers' attempts to place events Mother Shipton had prophesied into the 21st century or later, and relate them to comet or asteroid strikes still to come. She did say that the world would end in 1881, so her prophecies, in common with those of all prophets through the years, were not infallible. 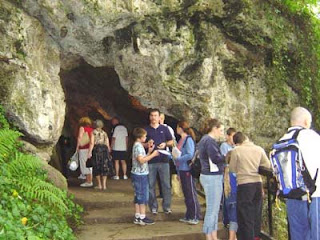 There's an interesting article on Mother Shipton's life at a section of the Knaresborough tourist website. It's an easy, but long, read, with serious historical detail included about her parents and background. (Left: Mother Shipton's Cave in Knaresborough, Yorkshire.)
Posted by Twilight at Monday, February 23, 2009

Spaceweather.com has some good photos of the green comet. With it getting to within 2 degrees of Saturn should be interesting to see what happens. Lynn Hayes has an article you may want to read.

Sorting out the chaff from the wheat at Ma Shipton's is never easy though she was extraordinarily prescient.
thanks Rossa for the tracking info.
XO
WWW

Just read the realastrologers.com blog and Pat's got an interesting article about Lulin. It's been in our inner solar system since the mid 90s when it hung around in Pisces, about where Uranus is now.

It reaches it's conjunction with Saturn tomorrow (opp Uranus in Pisces) just as we have the Pisces New Moon.

Sure are interesting times!

Rossa - Thanks for the links and references to blog articles - will check 'em out.

I'm keeping a very open mind on the topic of comets - all theories welcome ! :-) I have to say though that in this area I'm leaning towards skepticism. But it'll be an interesting spectacle to watch.

WWW ~~~ yes, she's interesting and a colourful piece of history.
When you consider that she was born before Columbus "sailed the ocean blue", she becomes even more fascinating. :-)

I have a small boy called William Lilly (real name) on my school bus. One might at first assume his parents named him after the famed English gent, though on making the acquaintance of young William and his family it quickly becomes obvious this is decidedly unlikely.
Mind, the original Mister Lilly was, in some circles, accused of starting the Great Fire of London. This is much more in our later William's line. He will undoubtedly end up in the slammer for arson, burglary, or some other illegal mayhem.
But, then, believe me it runs in the family.
Personally, I find comets extremely sad. They always seem so lonely and cold, condemned to sail the oceans of space for eternity like some cosmic Flying Dutchman.

RJ ~~~ What a name! I wonder if he's known to his peers as Willy Lilly? I love your stories of your wee charges.

That's a wonderful description of a comet - "Cosmic Flying Dutchman".

Maybe, alternatively they're a bit like a school bus too, carrying tiny seeds of life, but in a comet's case it'd be looking for a celestial body upon which to crash and dump them, and start up another species of what we call "life". :-)

A bit more:
on a summer night in 1488 a young girl gave birth to an illegitimate child in a cave in North Yorkshire. It was not the first such child to be born - certainly not the last. But this child was to grow into a woman whose name still carries the mysterious power of prophecy. Why? What was it that made Ursula Sontheil, later the wife of an ordinary carpenter called Toby Shipton,

Brian ~~~ thanks for that - I must have found mistaken info on-line, or perhaps I got the name muddled in my own mind later. :-)