Albert Newsam was born deaf and mute May 20, 1809 in Steubenville, Ohio. At the age of eleven years Newsam was taken to Philadelphia by William P. Davis, who posed as a deaf-mute brother. Davis intended to exploit the boy's artistic skills for his own gai n but Newsam was rescued by the president of the Institution for the Deaf and Dumb, Bishop White. This enabled Newsam to secure a safe haven at the institute where he received an education.

In 1827 Cephas G. Childs took on Newsam as an apprentice at his engraving, and later, lithography firm. By 1829 Newsam was supplying Childs with many of the prints he offered to the public. When Childs left the business in 1834 Newsam continued to work for the new owners, George Lehman and Peter S. Duval.

Newsam was most noted for his portraits. In the early part of his career he often drew them from life; in later years he worked from photographs and daguerrotypes. Eventually Newsam became the principal artist at Peter S. Duval's firm. In 1838 Duval issued ten numbers in a series called the Parlour Review. This weekly magazine was issued in French and English and included four pages of music per issue. It also featured portraits drawn by Albert Newsam of famous composers and performers, including Beethoven, Bellini, Cherubini, Rossini, Paganini, Talma, and Catalani. 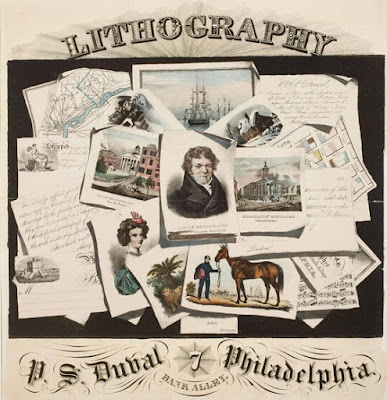 Some of Newsam's lithograph portraits and artwork can be seen in the right-hand column HERE, clicking on a thumbnail image will enlarge it. 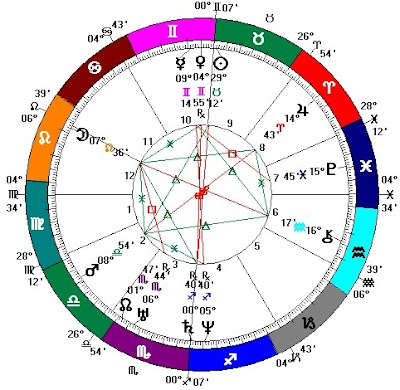 Albert Newsam was cruelly denied communication by speech and hearing, relying only on sign language, and his art. Is this indicated, or reflected, in his natal chart by the conjunction of Saturn and Neptune in early Sagittarius opposing his Sun, Mercury and Venus conjunction which straddles the cusp of Taurus/Gemini ? Pluto squares natal Mercury too, but Chiron, "wounded healer" trines Mercury from Aquarius, allowing some relief.

Interestingly (perhaps) Louis Braille, the blind organist who invented the Braille system of communication for the blind was born in 1809, on 4 January. He was of the Neptune conjunct Saturn group also, in his case the Neptune/Saturn conjunction semi-sextiled (a tad widely) his Sun and Mercury.

Newsam's chart has the makings of a mystic rectangle...two oppositions connected by two trines and two sextiles. His Moon is between 2* and 14* Leo, so the rectangle is dependent upon the Moon's position. From the bio you provide, I'm inclined to believe his birth was 8 AM to midnight, strengthening the rectangle. Even if the Moon is in the earlier degrees of Leo, a mild rectangle is still present. At minimum, he has a wedge (one half of the rectangle) formed with Mars, Jupiter, and Chiron. The rectangle provides benefits (sextiles, trines) through detriments (oppositions)...a fine balancing act easily thrown-off by the oppositions, and the individual is usually acutely aware of limitations. All of his other planets form aspects to the planets of the rectangle, further emphasizing a peculiar dependence on opportunity via limitations, and limitations via opportunity.

Some of his lithographic portraits appear almost as real as a photograph, so his artistic abilities can't be denied. I'm not one to fully appreciate portraiture as an art form, thought it definitely is. I don't want a face on my wall staring back at me...LOL. Remember the auctioneer in "The Best Offer" with his secret room of pilfered female portraits?

mike ~ Yes, there's a Mystic Rectangle in the making there. Good points, thanks!

It's said that when a person is deprived of one or more of his/her senses remaining senses become more acute - that could account for the almost photographic quality of some of Newsam's portraits. Portraits aren't my thing for decor either, though I do admire the ability to properly capture a person's likeness - in paint or pencil.
Yes I do recall that secret room of portraits - cree-e-epy!!

Have you been keeping-up with "Dancing with the Stars"? I only receive ABC over the airwaves and I often have the TV on in the background while on the internet. "DWTS" doesn't appeal to me, however I've been fascinated with Nyle DiMarco (May 8, 1989). He is completely deaf and it appears to be genetic...he's fourth generation deaf. How he manages to dance is beyond me. Quite a hunk, too...LOL.
https://www.youtube.com/watch?v=-jwyjyg-ac0

BTW - Any newborn this morning (CDT) has a most interesting natal chart. Mystic rectangle, grand trine, and T-square:
http://planetwatcher.com/#1463744088

mike (again) ~ We've never watched DWTS - not even once. I did used to watch its equivalent in Britain occasionally - "Strictly Come Dancing" - commonly called just "Strictly". Goodness me! I suppose the lovely Nyle can "sense" the rhythm, rather than the melody through vibration - maybe. That is certainly an achievement.

Yes - a very nice chart for babies born this morning, as you highlight. They'll need all the astrological help they can get, to deal with what appears to be coming their way.