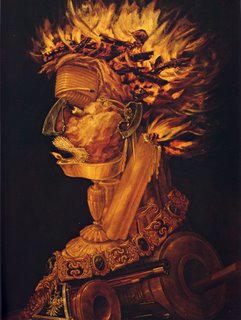 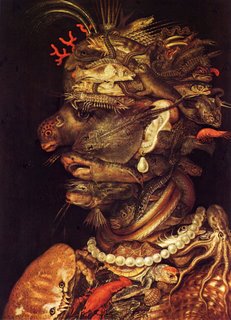 I first saw a reproduction of an Arcimboldo painting long ago, in a book in a school library. I was fascinated, and never forgot it. It's only this week, however, that I've discovered that there is a loose link between Arcimboldo and astrology.

The artist spent a large part of his career at the court of Rudolf II in Prague. Rudolf II was Habsburg heir, Holy Roman Emperor, king of Hungary, Germany, and the Romans.
Rudolf II is said to have been one of history's famous eccentrics. He gathered around him in Prague a collection of individuals who might be termed "la creme de la creme". In a search to understand the deepest secrets of nature and the riddle of existence, Rudolf invited to his court such notables as Danish astronomer Tycho Brahe, German mathematician Johannes Kepler, English magus John Dee, Francis Bacon, and painter Giuseppe Arcimboldo among others. Prague became the hub of art and science. Rudolf is also known to have had astrologers resident at his court, and was said to rely heavily upon their predictions. He owned a pet lion who had the same rising sign as himself, and the story goes that when the lion died, Rudolf died the next day.

Arcimboldo must surely have been influenced by the "glitterati" of whom he found himself a part . His set of paintings of The Elements (Fire, Water, Earth, Air) were perhaps commissioned by his patron whose interest in astrology and alchemy was well known. The many portraits he painted, constructed entirely of fruits, flowers, fish, animals, and occasionally books or utensils were inventive and masterful. Often described as early surrealism, they are really more allegorical than surreal. Arcimboldo also developed a serious interest in attempting to equate musical notes with visual colors, and invented an instrument with which to practice this art. I wonder if Kepler's influence was showing here, for he too had ambitions related to musical science.

As well as painting for the Emperor, Arcimboldo acted as what we might call "entertainments director" to the court. He organised celebrations, parades, festivals, designed costumes and sets.
It's a pity we cannot know Arcimboldo's birth date. I'll guess that Aquarius and/or Uranus features strongly in his chart - his portraits are so far from what was then standard practice. They are inventive, clever, satirical - funny too. Leo might figure heavily, this artist's show-bizzy abilities are a clear clue. Venus, possibly in Taurus - solid artistic ability and a love of nature.
Rudolf II eventually suffered a decline in mental health as eccentricity morphed into insanity. We should be grateful for his patronage of some of the greatest minds and artists of his time.
Posted by Twilight at Saturday, November 18, 2006