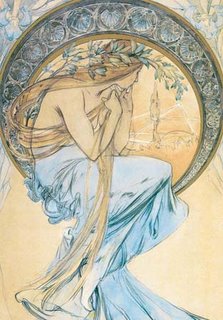 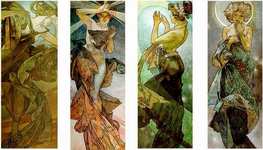 How can I not adore Alphonse Mucha's work? He even acknowledges astrology in his illustration "Zodiac" (below).
He was born on 24 July 1860 in Ivancice in the now Czech Republic. Sun, Jupiter, Mercury and Saturn were all in Leo. Moon in Libra ,Venus in Cancer, Mars in Capricorn. Uranus Gemini, Neptune Pisces, Pluto Taurus.
His work became very popular very quickly after an early period as the proverbial "starving artist". With 4 planets in Leo, he was not destined to starve for long! Moon and Venus in mutual reception, Neptune in Pisces and Pluto in Taurus must all have aided his talent for that delicate, flowing style, an appreciation and celebration of femininity at its best. His popularity was not long-lived, however. It has been said that the market became saturated with too much of his work too quickly causing value to decline. He spent much of his later career painting epic works depicting Slav history for his homeland.
Alphonse Mucha is remembered in my bedroom, where "The 4 Arts" set and two of "The Stars" set , nicely framed, decorate the walls 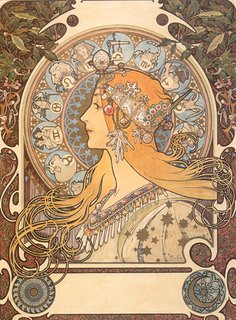 Posted by Twilight at Wednesday, November 15, 2006