Alexander Calder. The anniversary of his birth is coming up next week, on 22nd. I posted about him some six years ago, a re-run tidied and edited wouldn't go amiss.

Calder invented the mobile, the first example of art in motion, but using natural air currents instead of today's technology, to provide movement. He said of his work:


"Each element can move, shift or sway back & forth in a changing relation to each of the other elements in the universe. Thus, they reveal not only isolated moments, but a physical law or variation among the elements of life. Not extractions, but abstractions. Abstractions which resemble no living things except by their manner of reacting." 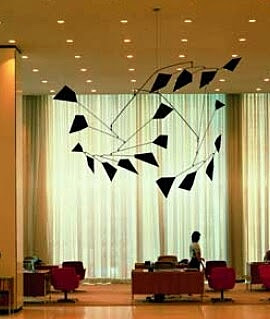 Calder was a pioneer in his era. As well as mobiles he produced huge and dramatic sheet metal sculptures for public spaces, tiny pieces of jewellery and objets d'art made from precious metals, also some abstract paintings. 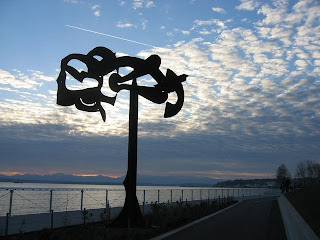 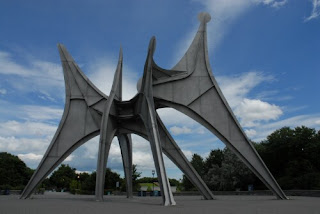 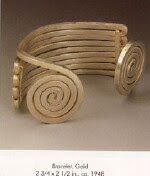 He is said to have been influenced by some of his contemporaries: Joan Miro and Mondrian, using the inspiration he gained from their work to bring forth a kind of "spin-off" - literally.

Born into a family of artists, Calder showed early aptitude for sculpture, but chose to study engineering. 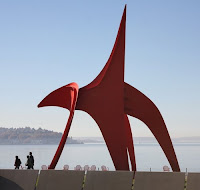 "Despite his talents, Calder did not originally set out to become an artist. He instead enrolled at the Stevens Institute of Technology after high school and graduated in 1919 with an engineering degree. Calder worked for several years after graduation at various jobs, including as a hydraulics engineer and automotive engineer, timekeeper in a logging camp, and fireman in a ship's boiler room. While serving in the latter occupation, on a ship from New York bound for San Francisco, Calder awoke on the deck to see both a brilliant sunrise and a scintillating full moon; each was visible on opposite horizons (the ship then lay off the Guatemalan coast). The experience made a lasting impression on Calder: he would refer to it throughout his life. Calder committed to becoming an artist shortly thereafter, and in 1923 he moved to New York and enrolled at the Art Students League. " 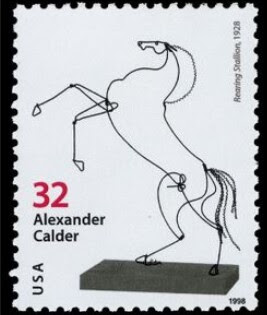 Before I looked at Calder's natal chart I decided there would have to be a goodly dose of Air in it, to account for his being drawn to produce artwork relying on air for its display. His inventive and futuristic style seemed to say Aquarius - or a strongly aspected Uranus. There'd also be some close Saturn connection to account for his choice to study engineering - not the obvious choice for someone with the soul of an artist. Let's see! 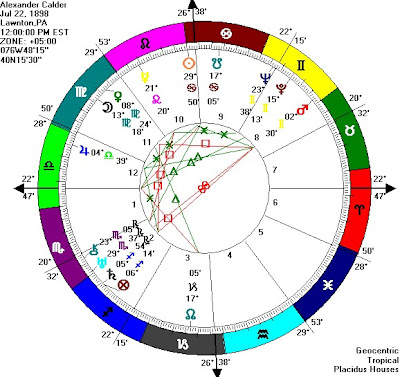 Born on 22 July 1898 in Lawnton, PA. I can find no note of his time of birth, so the chart shown is set for mid-day. Ascendant and exact Moon degree will not be accurate.

No Aquarius, but a nice close trine between Uranus in Scorpio and Cancer Sun, both at 29 degrees. And three planets in Airy Gemini, with Jupiter in Libra makes Air the dominant element in his chart. Saturn, which connects to metals and engineering is out of sign but conjunct Uranus, so also trines his natal Sun. The Moon would remain in Virgo with Venus whatever his time of birth - Virgo's insistence on attention to detail and exactness would be an important component in his ability to produce the kinetic artwork he's famous for.

“To an engineer, good enough means perfect. With an artist, there's no such thing as perfect.”.

“The underlying sense of form in my work has been the system of the Universe, or part thereof. For that is a rather large model to work from.”

Something to appeal to the astrologer in us (or in some of us):
"Spheres Within a Sphere"

I've viewed several of Calder's installations and they are magnificent. As with most art, viewing up close and in real life makes a world of difference, but particularly Calder's massive-scale pieces. His "Tom's Cubicle" is at the Nelson-Atkins Museum of Art, one of my old haunts. I saw several of his mobiles at either or both the Whitney and MOMA...his mobiles are my favorites.

mike ~ I'm not sure whether I've seen any of his work in real life or not. There was a Calder-like mobile in one of the arrival halls of Manchester Airport, UK some 10 years ago, but it was probably a copy-cat's version. There's a big red sculpture in Oklahoma City that looks similar to some of Calder's outdoor sculptures but, again, I don't think it's a Calder -
anyjazz has a photo of it on flickr
https://www.flickr.com/photos/49024304@N00/44057940
That was me in the matching red shirt.


The red sculpture photo in anyjazz' flicker:
Galaxy
Artist:
Alexander Liberman
Materials:
Welded Steel, Painted Red
Dates:
Installed, 1984
(NOT A PART OF OKC ART COLLECTION)
"Galaxy" is a 14
-
ton monumental sculpture that reaches 45 feet in height and 27 feet in width. Composed of 14 elliptical hollow forms painted in "Liberman Red" that soar to one single point, it was constructed at the artist's studio in Connecticut and brought to Oklahoma City on three flatbed trucks. The sculpture was commissioned by Leadership Properties, Inc., in order to expand cultural growth and to provide an exciting environment for those who work in the area."
http://www.okc.gov/arts/New%20folder/Public%20Art%20Tour%20Program.pdf

mike (again) ~ Thanks. We visited the OKC Museum of Art years ago, maybe we saw the Calder piece, but I don't remember - seen too many other things since!

Alexander Liberman eh? - Hmm - he seems to have been man of many talents:

Alexander Liberman, a force to be reckoned with at Condé Nast for fifty years, remains a controversial figure more than a decade after his death, in 1999. As the company’s editorial director, he mentored and traumatized several generations of editors, photographers, and art directors at Vogue, Vanity Fair, House & Garden, Mademoiselle, Allure, GQ, Details, and Self, by tearing up, tossing out, and completely rethinking whole issues days before their deadlines.
http://www.newyorker.com/books/page-turner/alexander-liberman-a-definitively-modern-man

Bet he was popular with magazine staff! ;-/

As a youth, I spent many, many hours at the National Gallery of Canada which is where in their collection, I first saw Calder works .

More recently, I enjoyed the opportunity to see his Circus, among 80 other early works, at the Art Gallery of Ontario, of which more here -

The Circus itself resides permanently at the Whitney -

Sabina ~ Thanks for this - it led me to look among YouTube offerings - there are two or three related videos there of Circus, and Calder doing the necessary - here's one link:

Gee, thanks, what fun! (I never seem to think of looking on YouTube for suchlike.)

In a related vein, does anyone else notice synastry with artists whose works speak to them? Eg, in this case, his Sun cj my Jup/Ura, his Nep cj my MC, and so on....