Still Aboard That (Zodiacal) Ship of Fools 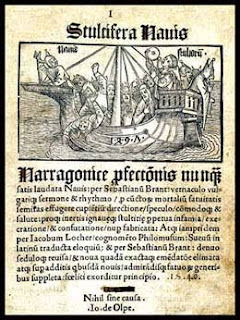 The term "ship of fools", as an allegory, harks back to medieval times when it was the custom to rid society of "undesirables": the mentally ill and other outcasts, by gathering them into a boat or cart and having them taken away. The origin of the descriptive phrase appears to be a book by Sebastian Brandt, 15th century German humanist and satirist. His allegorical poem/story "Das Narrenschiff" criticises the state of the church, as well as what he saw as the weaknesses and vices of his time. 15th century painter Hieronymus Bosch gave us his version of Ship of Fools, in a painting (shown below). This was originally part of a triptych, a linked 3-panel piece of artwork, other parts also probably relating to aspects of human weakness.

500+ years later we can still relate to humanity as a Ship of Fools....no need to go into detail here, passing readers will recognise the indications.

So then, if this painting presents an allegory of humanity's weaknesses, it must also represent the weaknesses, or shadow sides, of the 12 signs of the zodiac, which together make up human nature. Conveniently, coincidentally (or not), there are 12 figures in Bosch's painting - too good a chance for me to miss!

First a brief explanation of the "props" in the painting. The round object hanging between the central group is a suspended pancake. As a game the characters try to take bites from it. Traditionally all eggs and milk were eaten before lent, but the fools choose to consume them in wasteful luxury. The pitcher upside down on a pole behind a nun, and some stored barrels behind the monk symbolise consumption of alcohol. The trees used as masts are symbols of the tree of life. The figure reaching up to a roasted fowl tied to the tree represents the gluttony of the times. (The idea comes from a medieval custom of attaching a roasted fowl or ham to the top of a greasy pole so peasants could try their skills to retrieve it.) The long banner flag with the crescent moon on it as a representation of Islam. In the tree top, an owl, usually symbol of wisdom, here representing heresy, as a bird that hunts at night - dark and spiritually unenlightened - symbolic of evil and superstition in general. Here goes then - looking for a representation of weaker sides of the zodiac signs: Some are better representations than others; Bosch didn't consciously have astrology in mind when he painted this!

Taurus (Totalitarian, self-aggrandising) - figure with arm in the air - at the back

Leo (Irritable & frustrated when not in spotlight) - figure dressed as Fool, sitting alone, at right

Sagittarius (Silly, greedy, overbearing) -figure directly behind the pancake on a string

Aquarius (Trying too hard to be different, poseur) - figure in water on right

Pisces (Addictive, lazy) - figure hanging over side of boat vomiting -at right.

(Alternative interpretations of the figures are very welcome - via comments.)

We're still aboard our 21st century Ship of Fools.
Posted by Twilight at Thursday, September 02, 2010

I try so hard to be different and try being 6' tall redhead and not be a poseur. Particularly in 4" heels. Where did it all go wrong.

I did go through a phase in my mid 20s when I can say that the word poseur would be a good description. I grew up without a feminine model with all the women in the family eschewing make-up or clothes other than trousers and jumpers. And was always told redheads should only wear blue, green or brown...ugh! Can't wear brown or green these days and blue is always bright turquoise...ha!

I left my sartorial rebellion until around 22 years old and then went to the opposite extreme. Now I wear all the brights whenever I want from fuchsia to purple, turquoise to lemon yellow. Only exceptions are red and orange as they can make me look washed out and I'm pale enough as it is without doing an impression of a ghost!

As a concession to age I don't wear black or white these days having traded them in for dark chocolate brown and cream/ivory which is kinder to my ageing skin.

But I refuse to cut my hair short which all the so called pundits insist I should do now I'm over 50.

Pah! I hate the words should do and ought to. Grow old disgracefully, that's what I say.

Huh! I don't believe I'm given to lies and unreliability. My fifth wife agrees with me. My previous four likely wouldn't. ;-)

The planet is the ship, the human species the fools. Everything else is just along for the ride.

This must be one of your most inspired posts, Twilight!

Aries, my sun-sign: self-seeking, arrogant you say. Correct, I would add daring, acting before thinking, defying without consideration (of others or the risks involved).

Sagittarius, my ascendant sign: Silly, greedy, overbearing. Correct. Let me add: unrealistic, overly optimistic or believing all being possible, unsupportable to others (because mainly of the preceding).

But did I not have these defects, you would probably never even have heard of me, Sagittarius speaking...

I made it easy for myself to be different by emigrating to the US of A, where even if I'm "posing" nobody can tell. Mostly I'm not though -just being my obtuse Aquarian-type self. There's another shadow-side to Aquarius I should have mentioned: obtuseness, and stubbornness - though the latter applies to all Fixed signs (Leo, Taurus and Scorpio) too.

RJ Adams ~~~ I know, I know - all shadows do not fall on all people.
LOL - you're catching up on Henry VIII!

Yes. In total the species = the fools - true! And we shall be set adrift as such by Mother Nature, before too much longer.

Good additional points from a personal standpoint, thank you.

A very important fact you point out in your last sentence GP: without the shadow-side existing some things (good and bad) might never happen.

As a matter of trivia, T., Hieronymus Bosch is a character in an ongoing marvellous series of books by Michael Connolly and he is definitely in the grey area of humanity.

fun story twilight!
i thought i recognized the aquarian in the bunch as the one who is 'bearing water' to the man next to him who is halfway in and halfway out of the water. could he be the pisces?

Leo could still not resist dressing up, even to do a possibly infrequent, sulk! :-)

Shawn Carson ~~~ Well, yes - if demonstrating Aquarius's positive side, but here we're looking for the negative/shadow side. I had the character with bowl for Aquarius on my first try - then realised I'd overlooked something.
:-)

i am not sure how positive a thing it is to offer a bowl of river water, or whatever it is, to a thirsty man! this is a funny portrait, for sure!

Shawn ~~~ I suspected that what's in the bowl comes from the contents of one of those casks stashed onboard the little ship - though I suppose it might be river/sea water.

Let's say the two figures in the water can be interchangeable Aquarius/Capricorn - if Aquarius is holding the bowl, Capricorn is looking to "do a deal" with him for it ? ;-)

Great post as usual (that's why I keep coming back :)).
Like Gian Paul I would like to comment on 3 of the signs:
Aries, also my sun sign. Self-seeking, arrogant : probably, but I would also say also self-actualizing, perpetually looking for self-improvement and daring to thread on uncharted territory to do it. Aries arrogance often comes from their abundant childlike enthusiasm that can come across as arrogance.
Libra (lascivious and indecisive), my moon sign. My Moon would point out that its indecisiveness is often a way to ponder on the best way to find balance, redress injustices and re-establish harmony.
As for lascivious, I would disagree. It's to messy. Libra wants a balanced, harmonious, symmetrical pleasing and cold beauty. Nothing to overboard please.
My Pisces rising is a little bit stomped by the lazy part.Maybe it is not so much laziness as being lost in dreamland. Once grounded, Pisces do their fair share of work. It's the getting grounded that is hard.
As for the addiction part. Yes it's true, but maybe it is the shadow side of being lazy? Are Pisces lazy because they are addicted or are they addicted because they are lazy? In this case, I think they are being true to their nature and swimming on opposite sides of both characteristics.

Astrology Unboxed ~~~ Hi there Fabienne - thank you for the kind compliment.

Lol ! Now I'm beginning to feel a little as I used to feel back in my working days when I had to write annual reports for staff members. If I dared to write anything even slightly negative (which I sometimes did, because nobody is perfect and constructive criticsism is good) - wink.
The recipients of the reports, when interviewed about them, would immediately pounce upon any slightly negative remarks, and ignore the good, even brilliantly good ones.

To try to explain myself:
I realise that I haven't mentioned all the good sides of the 12 signs here, because that wasn't the point of relating them to the Ship of Fools - I chose to concentrate on the negative traits - of which we all DO have some.

I'm sorry if this seems harsh. I did check my thoughts with keywords for shadow sides of the zodiac signs to be found on-line too, so these are not simply personal views.

I agree, Fabienne that you can rationalise some so-called shadow sides - as you have done - to convert them to them having positive connections. And, as Gian Paul said, and I agreed, without the negatives some things (positive and negative) would not happen.

If we own our negative sides, I think it does help. I'll own my
obtuse stubborn side from Aquarius; my weepy over-sentimental side from Cancer rising, and my occasional aggression from Aries Moon. All could be translated into something helpful, but also something a wee bit dangerous to my self and my serenity, so it's good to be aware of them.

Guilty as charged! on all counts. I did feel defensive and most certainly had difficulties owning certain aspects of my shadow sides: self-seeking, yes, arrogant no; lascivious, hell no, indecisive, hell yes; addictive, yep, love my mood enhancers, lazy, no I am just daydreaming (wink).
I guess some aspects of the shadow are more acceptable to me than others. Plus maybe a compulsive need to prove those negative aspects wrong as in "they are not really bad, just need to be seen from another perspective".
I love it when I am busted. Thanks Twilight.

Astro Unboxed - Fabienne ~~~
I'm absolutely certain that a jury of your peers would find you Not Guilty, Fabienne. :-) We all do it, I do, all the time, it has to be part of our human makeup, and defence reflex action.
:-)