Walter Sickert, German-born painter, teacher and art critic, raised in England, was born 31 May, 1860. He has been suggested as responsible for the Jack the Ripper murders in London, mainly by novelist Patricia Cornwell who spent gobs of money obtaining DNA from his paintings, having it compared to DNA from a letter allegedly writter by "the Ripper". Result has been proved inconclusive. Details in a 2005 piece by James Parker at Boston Globe.

Sickert is certainly a seductive candidate for the Ripper role. An evasive, protean man, with a taste for squalor and a habit of skulking around London's East End, he took a keen interest in the Ripper murders.

He painted a series of crepuscular Ripper-themed works, including one titled "Jack the Ripper's Bedroom," and liked to spook his models by wearing a red Ripper scarf. And Cornwell established, at vast expense, a far-from-conclusive DNA link between Sickert and one or two letters allegedly written by the Ripper.

The twin pillars of her argument however, were psychological and circumstantial. Sickert, in her rendering, was a bohemian psychopath born with a genital fistula "requiring surgeries when he was a toddler that would have left him disfigured if not mutilated" (and driven to murder as a consequence). Additionally, she claimed that it couldn't be proved that Sickert was not in London in August 1888, when the Ripper was at the bloody peak of his activities.
In his postscript, however, Sturgis quietly produces evidence that those childhood "surgeries" were not, in fact, for a genital fistula, and that far from stalking the gaslit alleys in August 1888, Sickert was holidaying in France with his mother. So Sickert passes into the realm of purely fantastical Ripperology, where he will dwell alongside fellow "suspects" Prince Albert and Lewis Carroll.

Theorising on crimes so long past, and using persons so long gone as potential culprits, might provide conspiracy theorists with hours of fun, but to my mind this is neither a healthy nor admirable pastime - but it probably sells books! 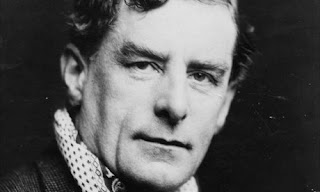 Walter Sickert was born in Germany, his father and grandfather were artists, his mother, said to be the illegitimate daughter of English astronomer Richard Sheepshanks, was in receipt of monies from a relative, and was likely the family's mainstay financially. The Sickerts moved to England in 1868. Walter's sister Helena became a writer and champion of women's rights. His own first choice of career was the theatre, but this seemingly didn't take off. He began studying art as assistant to James McNeill Whistler. Later, in Paris he met and was strongly influenced by, Edgar Degas. 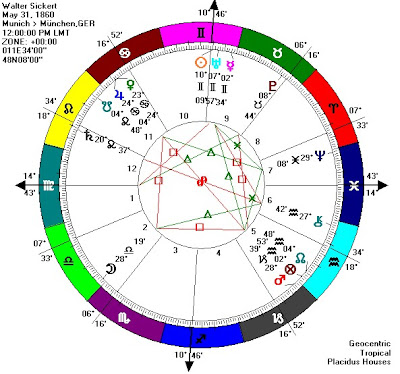 Walter Sickert is reported to have been "cosmopolitan and eccentric...favored ordinary people and urban scenes as his subjects". It's not hard to identify "eccentric" in this natal chart! Uranus, planet of eccentricity sandwiched between Sun and Mercury (at the very center of his self and the way his mind worked, forming a stellium (cluster) in Gemini the communcation sign.

Venus, planet of the arts is conjunct Jupiter in Cancer, sign of sensitivity and sentimentality. Being translated in this context = Jupiter's exaggerating tendencies coming through Sickert's painting style. Jupiter is normally thought of as bright and benign though. In his case I'd say there's a exaggeratedly dismal quality to much of his painting. Cancer also connects to a tendency to withdraw into a home base - in much of his work, Sickert has depicted this - albeit a rather seedy home scene peopled by ladies who "did what they had to do" to get by.

I'm a bit surprised not to find Pluto more closely involved. Moon at 12 noon was in late Libra - if Sickert were born after 4pm Moon would have moved into Scorpio, which seems to me to be quite apt for the dark atmosphere he often portrayed.

Images of Sickert's paintings don't tranlate too well on-line. I guess this is one instance where "you have to be there" - at an exhibition, I mean. Here are a few examples: 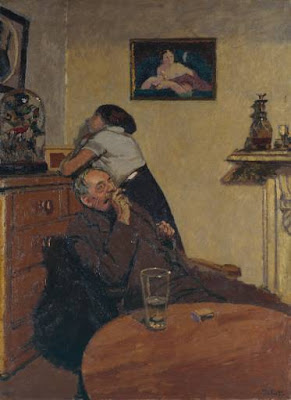 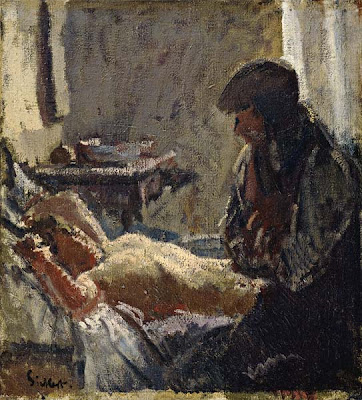 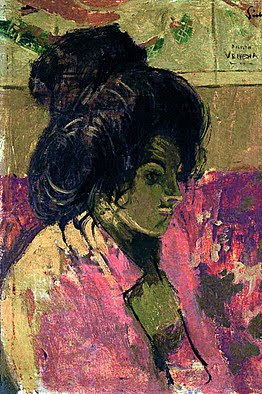 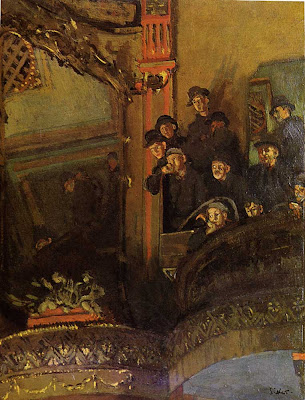 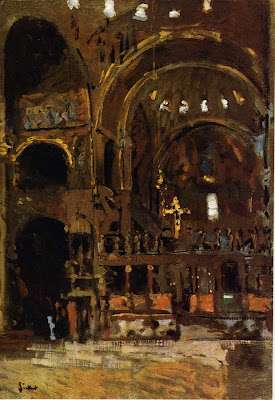 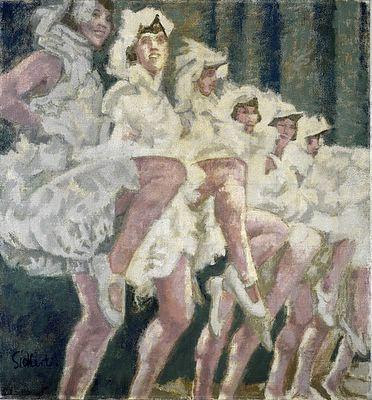 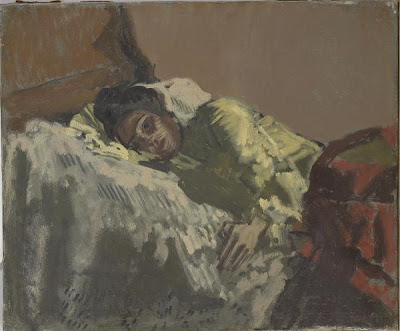 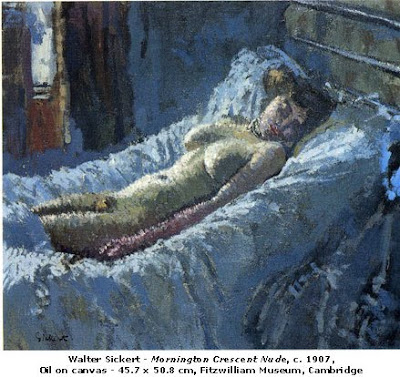 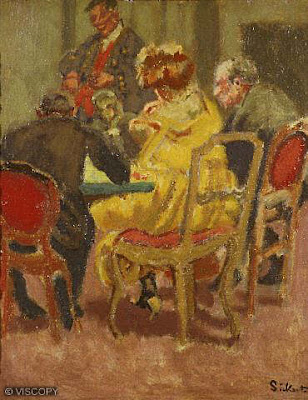 Ooooh I got goosebumps when I read the headline of this post. We have just had another man arrested on Monday this week in Bradford that appears at first glance to be a Jack the Ripper copy cat. That's the modern day Jack the Ripper aka Peter Sutcliffe.

A 40 year old who has been doing a PHD in criminology at Bradford University specialising in serial murderers !!!!

He's been charged today with the murder of 3 prostitutes and the police have opened their files to see if he may have murdered other women.

In Court today when asked his name he called himself Cannibal Crossbow a tag line that was headlined in a number of red top tabloids this morning. He's adopted the name clearly to court notoriety and infamy. Cannibal in relation to Hannibal Lector perhaps and the Crossbow because he was caught on CCTV last weekend chasing a woman out of a block of flats, knocking her down and reportedly shooting her dead with a crossbow.

Right on my doorstep in Shipley. Brings back memories of meeting a friend in Leeds one night at the height of Peter Sutcliffes reign of terror. My friend Jeanette walked past the exact spot in Headingley where he killed a girl and from the reports we worked out she was only 5 minutes away from being his victim. He may even have been there and seen her walk past.

Sorry if I've spoiled your lunch it was just the synchronicity that got to me.

Rossa ~~~ Oh! Poor old Bradford seems fated to be home to these monsters - I remember the Peter Sutcliffe episodes very well - I was living in Leeds at the time.

Goodness - this one sounds like a real nutter - but a wickedly dangerous one. At least he was caught.

WWW ~~~ I hadn't heard that theory - but back then they were investigating all and sundry I think...see Wiki:

Walter is rather dishy though - I don't believe for one minute that he was the Ripper, though he did take an unhealthy interest in the scenario.

The Royal suspected of being Jack was the Duke of Clarence, if my memory serves me well. I'm sceptical of most of the 'suspects', mainly because all serial killers suffer from not being up to much in any other area of life, so the chance of a successful person turning to serial killer is unlikely.
My own take is that he didn't exist. A couple of murders happened and people realised they could play the media, thus taking the scent off them while they got rid of a little problem. Hence, five separate murders become the ominous Jack.

anthonynorth ~ That's an interesting theory, AN, and plausible too. In those days forensic investigation and the technology we have today wasn't available, so it would've been that much easier to copycat without detection, I suppose.

Cornell's book on Sickert (Jack the Ripper- Case Closed) is easily the most compelling of all the books written on the Whitechapel Murders - and I have read quite a few. Her central plank against him is not DNA, but forensic evidence linking him to the 'Jack the Ripper letters', which have been linked to his own writing paper. In any case, he has been forensically linked to the Gateshead murders, which happened shortly after the murders in the east end of london. The scornful reaction of the art world (and the Ripper publishing industry) is interesting in its hysterical nature. But he was almost certainly the killer.

Julian McSweeney ~~~ Thank you for your input. It's good to have views from someone who has actually done some serious reading on the topic.

For myself - I'm going to have to leave it at yet another "don't know". But I find the comments "for and against" provide some interesting fodder for thought. :-)

There is absolutely NO EVIDENCE for WS being JTR...it is merely a means for PC to sell a lot of books! WS should be appreciated for being one of the finest painters of our country not for a half baked apology of a theory linking him to JTR!

Anonymous ~~~ Hi - Well, as I've said I'm a "don't know" on this.
I'm not a fan of Patricia Cornwell' style and like you keep in mind the the "to sell more books" angle. This is an essential BS detector - not only in this case but in all cases where authors write about some controversial topic.

I've just watched again a BBC programme on Ms. Cornwell's investigations into the case. I think she sincerely believed she was on the right track but appeared to be blinkered if some of the evidence didn't suit her views, as when a criminal profiler told her that psychopaths like the Ripper don't stop their killings until they are either caught or they die. Sickert lived to a great age and the crimes certainly stopped well before he died.
It seems obvious that Sickert took a rather unhealthy interest in such murders. Some of his paintings do, indeed, resemble the photographs of the corpses of the Ripper victims, but Sickert might have obtained some of these photographs to work from; it's not impossible that, moving in artistic circles, he got to know some of the police photographers. And I can well believe that he might have sent some of the hoax Ripper letters to the police as a result of his possessing a somewhat morbid sense of humour.

Anonymous ~~ Thanks for your thoughts. I tend to agree with you. Sickert was clearly drawn to dark subject matter, and no doubt had contacts in both police and medical circles from whom he could have obtailed photographs or sketches. His dark style has drawn him some unfortunate attention - even many years after the fact, and especially these days when there's a conspiracy theory around every corner.