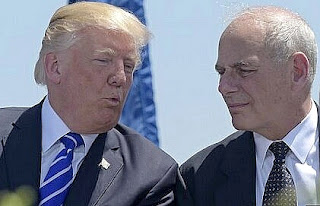 A quick look at the natal chart of President Donald Trump's new Chief of Staff, John F. Kelly, a retired 4-star General in the US Marine Corps, and had previously served as United States Secretary of Homeland Security.

The new Chief of Staff faces a somewhat shambolic White House, after a string of firings or resignations of prominent figures. The former General's new boss, whose other title is Commander in Chief, has not always portrayed his own best side (if he does, in fact, have a best side). President Trump does appear to respect Generals though, so perhaps that offers a gleam of hope for calmer days ahead.

I know nothing of Secretary Kelly's reputation, or his personality, save what little I've read about him, and what might be revealed by his natal chart. Adjectives I've encountered in descriptions of the retired General include "firm but benevolent", and "solid". His natal chart does indicate those attributes. Sun and Mercury in steadfast, stoic but stubborn Taurus, with Mars (planet of energy and aggression) in harmonious trine to his natal Sun, from meticulous, critical Virgo; Saturn, planet of discipline and framework is also in Virgo. I think Kelly definitely has the skill set needed for the tricky job he has been handed. 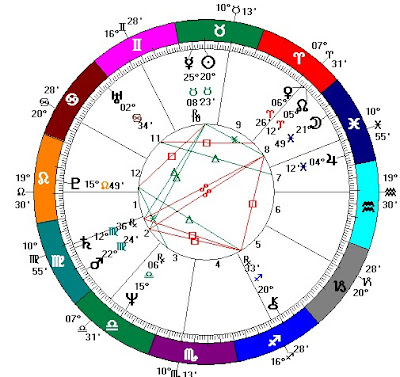 Without a time of birth Moon's position can't be pinpointed exactly. At noon Moon was at 21 Pisces - if J.F. Kelly were born very, very late in the day I guess Moon could have been close to the Pisces/Aries cusp; otherwise it would have been somewhere in mid-Pisces. Jupiter, anyway, is in early Pisces (conjunct my own natal Jupiter as it happens - but that signifies nothing at all). If Kelly's Moon were to be natally in Pisces, along with Jupiter, that would signify a softer more emotional or philosophical side to his nature, as contrast to his practical, no-nonsense Earthy side from Sun, Mercury and Mars. His natal Venus in Aries adds a touch of astrological Fire to the mix. I'd say this dose of Aries underlines, in a slightly different tone, due to Aries' naturally straightforward attitudes, Kelly's no-nonsense, no "ass-licking", potentially blunt, but potentially fair approach indicated by Taurus/Virgo. At least, that's what most lookers-on will be hoping for!

Kelly's rising sign remains unknown without a time of birth. Guessing, in this case isn't easy, but considering the greater part of his adult life has been spent in the military, perhaps Mars close to the ascendant - which would give Virgo rising. Not willing to bet on that!

President Trump and his Chief of Staff are in no way alike - that's needless to say, for even without benefit of astrology it has to be obvious. It'll take all the former General's skills and tactics, honed in war, to bring order out of 2017's White House chaos, without risking being one of the next group of those being shown the door.

Should have checked his chart here first before writing on him.

James Higham ~ What had you to say about him? I'd be interested to read it. I've skimmed through your last few posts but didn't find anything about Kelly.

All lined up for a military coup perhaps?

I wouldn't be at all surprised.

Wisewebwoman ~ Hmmm - possibly; perhaps the choice was not Trump's, but chosen for him by the real Powers That Be. Watch and wait!

Using this expression as suspected birth time signifier, Kelly might likely have been born about 3PM:
Illustration:
http://pedantus.free.fr/Kelly_John_F_01.png

In my reduction of planet symbolism to elements of perception (sights, sounds, etc.) I think of Jupiter as a container of a volume, and Uranus as "noise". The natal trine of Jup and Ura is thus the noise of an empty barrel. Jup in H6 of employable entities is in Pisces of self-imposed limitations, and Ura in H10 is the noise/sound of an authority figure...the trine aspect blends these two qualities such that they are made one object "a noisy, empty, barrel".

Thus the innate particular tendencies of the native find an observable, *Self-identifying expression* in the form of figurative language.

Roger J. Satterlee ~ Thank you for this! It's late now, but tomorrow I'll take a closer look at a chart with a 3pm time of birth. I couldn't access the link you provided.

Roger J Satterlee ~ Ah - the link opened this morning (or my brain did!)! Yes, that'd give Virgo rising - seems fitting! Thanks again. :-)

I am sorely tempted to rectify his chart using only a pendulum, but giving him a Sagittarius ascendant. Has anyone rectified it to the date of his son's death?

Kayti Sullivan ~ Hi there! I made a quick search for any astrologers' rectification of his chart, but found none. I don't have the expertise to rectify it myself, but date of his son's death, and birth would be key ingredients to use, as well as his wedding date, retirement from military, and any known serious illness/operation dates. Even then, though, without a single clue as to approximate period of day or night of his birth, any rectification would remain iffy at best. My own birth was known for sure to have been in mid afternoon but, a rectification by a professional still couldn't pinpoint the degree of sign - but at least I'm certain of the sign. Even that knowledge about Kelly would be interesting.

Ascendant was traditionally thought to reflect in outward appearance of the subject, though this isn't reliable, as Sun sign can also influence appearance and build. From his facial appearance, Sagittarius isn't immediately a sign that comes to mind. Hmmm... process of elimination...I don't think he has Scorpio rising, or Cancer or Pisces, or Gemini.

I would be inclined to believe his ascendant would be Cappricorn. His face and stature remind me of a centaur. Look at this aspects to Saturn (receding hairline) The placement of Sun conjunct Mercury/Algol in the 5th (House of Children) with the Sun, ruler of the 8th (death) where sits Pluto, natural ruler of the 8th indicates the death of his son. Mars and Saturn in Virgo (career house of uniformed professions) with strong Saturn opposing the weakened Moon in Aries (water in fire sign) gives credence to his misogyny. Play around with this idea and see what you find.

Anonymous ~ Hmm - I hadn't looked at this for a while. Yes, Capricorn would probably be the best guess as Kelly's ascendant - his facial looks don't immediately say Capricorn to me, but the way he is perceived by the public does. I've looked for some younger photographs of him, but didn't find any - the only pic of him at all younger was possibly from his 40s - he was rather nice looking then, evenly featured, pleasant eyes, not hard-looking at all - so in his case, I don't think his looks relate to his rising sign.

The astrological points you note are apt - thank you.