I'd hoped to see Cloud Atlas last Fall, on the big screen, but our local cinema didn't schedule it. We rented the newly released DVD, watched it this week. I deliberately hadn't looked for explanations of the somewhat convoluted storylines beforehand, knew only that the theme rests on 6 interlinked stories spread over long spans of time, with embedded in them the idea that souls are travellers through time.

Cloud Atlas's 6 linked stories, for me proved to be one bridge too far, at least on a single viewing. I'd have felt more comfortably and accessibly into four tales, five at most, with such varied sets of characters to recognise. We spent quite a few moments throughout telling each other..."Look...that's.....whoever" "No it isn't!"...."Yes it is!"....."Oh yes....clever makeup!"

On reading various reviews and summaries after seeing the film I learned that 6 is a recurring number in the 6 stories. It comes up throughout the movie...for instance in the surname Sixsmith, in age 66, 6,000 pounds sterling needed to settle a debt, and so on. Don't know whether the number 6 has any esoteric meaning, there's the infamous "666", but that doesn't seem to be relevant here ....Anyone?

Without spoiling the film for those about to buy or rent the DVD, or read the book from which the movie was adapted, I'll mention a few themes which link the six stories. One I haven't noticed mentioned elsewhere is the highlighting of the key issues and patterns of whatever era each storyline is set. There's also a common theme of, to use a biblical expression, "kicking against the pricks": rebelling against the established culture and perceived wrongs of the time, even at danger to one's own life. 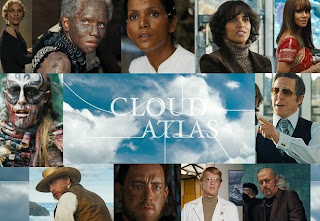 The stories begin in the 19th century. Slavery, abolition and freedom pop up prominently. In the 1930s the issue of antisemitism is mentioned, and homosexuality crops up. In the 1970s issues surrounding corruption and a nuclear power plant become important. In 2012 we descend into pure farce - well, if you can't laugh you'd cry, I guess the author was trying to lift the mood, a kind of light interlude - but for me this segment felt as if it were in the wrong film! From then on it's sci-fi time. In 2144, in what turns out to be Korea, "fabricants" presumably clones or genome-manipulated synthetic humans are used as labour while a powerful ruling class presides over a totalitarian state where the problem of ethnicity/race is replaced by prejudice over whether one came into the world via "tank or womb". The familiar pattern of prejudice continues, even then. Everything changes...but nothing changes. The sixth tale is set "106 years after The Fall" in 2321, then 2346. We are left to assume that "The Fall" was, at some point in the past, due to all-out nuclear war; a character mentioning overdose of "rad" being one clue. Three separate groups of humans have sprung up: valley folk, primitive, simple, using pidgin English which is hard to follow and best not to try, just pick up the odd word here and there. Another, rival, group is composed of cruel, grotesque face- and body-painted cannibalistic humans; the third group appear to have avoided all the devastation and have continued to progress, in true sci-fi fashion with highly advanced technology, to colonise the universe.

Multiple layers of different types of links are constantly presented for us to tease out : a letter, a book, a birthmark, piece of music might pop up, out of its own time or place. A viewer could perceive the stories as existing in linear time, with characters reincarnating, evolving upward or downward; or alternatively see the whole thing as a kind of onion or layered bubble where various lifetimes are existing in tandem, though never crossing through the layers or dimensions, with outside circumstances touching each layer in a different way.

We are assisted in following the links by inclusion of so many recognisable actors' faces, wearing different makeup as they take on a variety of characters. I've noticed several criticisms about the ethics of actors being made up as if from different ethnicities for their parts in this film. For instance, English actor Jim Sturgess, playing a young 19th century lawyer involved in the slave trade in the first story becomes an Asian in one of the futuristic sections; others switch genders and skin colours too - but it's all part of the concept that the same soul travels through time (or dimensions)in different bodies. Ethnicity problems are of our own making, souls do not have ethnicity - or so I suppose.

The film's title, taken from the novel's own, Cloud Atlas, is also the title of a piece of music composed by one of the story's characters: Cloud Atlas Sextet (there's that number 6 again!). The novel's author, David Mitchell explains the title thus:


"........the cloud refers to the ever changing manifestations of the Atlas, which is the fixed human nature which is always thus and ever shall be. So the book's theme is predacity, the way individuals prey on individuals, groups on groups, nations on nations, tribes on tribes. So I just take this theme and in a sense reincarnate that theme in another context. "

(See Wikipedia on the novel but beware detailed spoilers).

I enjoyed the movie, but felt it could have been "done" better, classier - I believe the novel's premise did deserve better. There was a bit too much heavy-handed caricaturing and stereotyping, not enough subtlety. I suspect, that because it's such a complex many-layered tale, to be told in limited, though longer than average, time the screenwriters and director decided certain points had to be hammered home quickly and securely for the audience, in order to provide some solid infrastructure.
Posted by Twilight at Saturday, May 25, 2013

My husband and I saw the movie on the big screen when it first came out and, in spite of obvious imperfections, *loved* it - especially the story's overall theme of putting others before self. Apparently the movie's moral message is what turned a lot of people off.

I'm glad I didn't know some of what I later found out when I first saw the movie; for instance I didn't realize some of the actors were supposed to be Asian. Instead, I thought they were some futuristic race of people! While some of the make-up was pretty amazing, some was not at all believable.

I was so intrigued by the story, I tried to read the book but couldn't get through the first few chapters. Unlike the movie, it just didn't flow for me. Now we're on our library's wait-list to rent the movie when it comes out on DVD. There's almost too much to take in during one viewing!

LB ~ A second viewing is on our "to do" list too.....well, on mine anyway - maybe when used DVDs make their way onto Ebay or Amazon. There's definitely too much to take in at one viewing. The fast-moving mosaic of situations shown early on in the film was especially muddling to me as a first encounter, but now I'd be able to keep up, I think. :-)

I love the general idea of a soul or some manner of eternal personality travelling through time... Husband and I, back in 2003/4, began trying to dream up (me) and write (him) a story along such lines, but using just 3 sets of situation spread from medieval times to the years of World War II, and a linking material object. He wrote a super beginning to the first chapter - I did keep it but at the moment cannot lay hands on it. Other things, such as marriage and house selling and moving to the USA got in the way of continuing that venture. I often still ponder on how such a set of tales could unfold and link up though. :-) That was one reason I was so keen to see Cloud Atlas.

Your story sounds promising, only too bad you've misplaced it! I know what you mean about real life getting in the way of creativity. It takes a real commitment of time.

It's a long story, but a snippet of info I received in a dream (about a past-life) ended up leading to the discovery in this life of a sister I always *thought* I had but couldn't prove. It was such a wild story, someone my sister casually knows wanted our permission to write a book about it. My response was a firm "nyet". Anyway, the point is I'm a believer in reincarnation.:)

LB ~ Amazing! Reincarnation is on my list of "don't know, but it's fascinating to think about" kinds of things. Wouldn't discount the idea at all. I could only knock it off that list into the "I believe in" list if I ever had a personal experience, such as yours, to convince me.
:-)