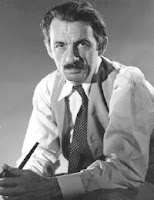 I'd never heard of Thomas Hart Benton until, one day, wandering around an antique store in Nocona, Texas Husband picked up an old 78 rpm record set in an album-type binding with a black and white illustration on the cover.
"Look! Thomas Hart Benton!"
"Who?"
"He's a famous American artist - painted a lot of murals."
"Oh."
Husband bought the record set. See image (below) and link to caption HERE.


I stumbled upon Thomas Hart Benton's name again the other day in a list of 20th century artists, while seeking inspiration for a post. Decided he was the man for this Arty Farty Friday noting that he was born on 15 April, anniversary coming up on Monday. Full birth data 15 April 1889 in Neosho, Missouri; died in January 1975. There's no shortage of information on this artist on line, but I could find nothing on his astrology, not even an entry at Astrodatabank. So I'll be donning the old amateur astrologer's hat again later in the post.

Nutshell information on the artist and his works:
From the book description at Amazon of Thomas Hart Benton: A Life by Justin Wolff.


Born in Missouri at the end of the nineteenth century, Thomas Hart Benton would become the most notorious and celebrated painter America had ever seen. The first artist to make the cover of Time, he was a true original: an heir to both the rollicking populism of his father’s political family and the quiet life of his Appalachian grandfather. In his twenties, he would find his calling in New York, where he was drawn to memories of his small-town youth—and to visions of the American scene.

By the mid-1930s, Benton’s heroic murals were featured in galleries, statehouses, universities, and museums, and magazines commissioned him to report on the stories of the day. Yet even as the nation learned his name, he was often scorned by critics and political commentators, many of whom found him too nationalistic and his art too regressive. Even Jackson Pollock, his once devoted former student, would turn away from him in dramatic fashion. A boxer in his youth, Benton was quick to fight back, but the widespread backlash had an impact—and foreshadowed many of the artistic debates that would dominate the coming decades.

There are dozens of examples of his work on the net, I've picked just a few representative of his "American life" murals and paintings (I'm never sure which are part of larger expanses of murals and which are single paintings); then a few of his controversial set of 8 "Year of Peril" paintings relating to World War II. 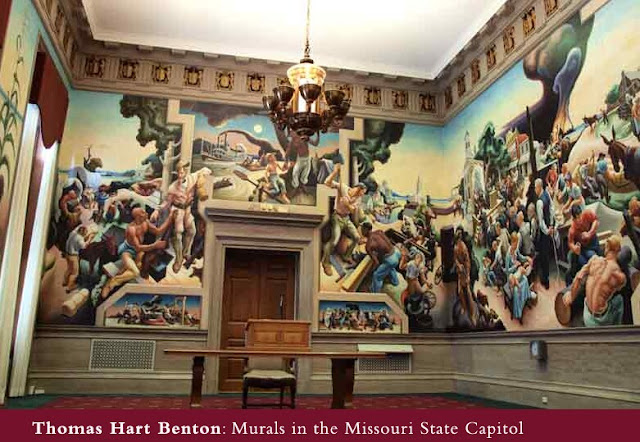 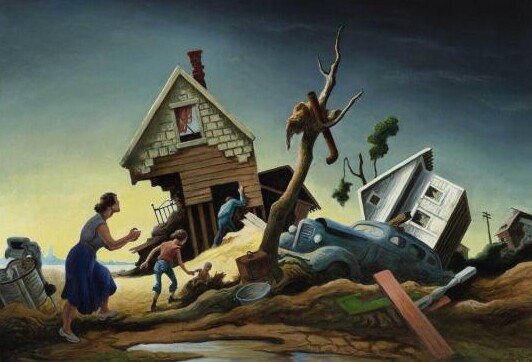 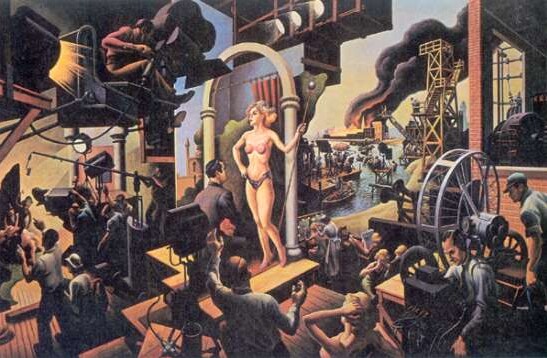 Arts of the West 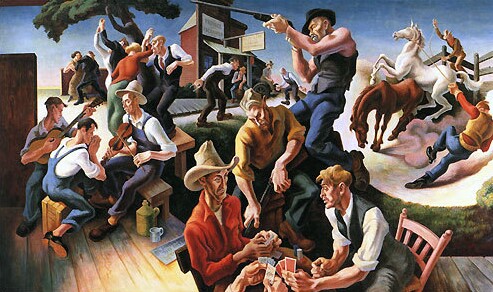 From Year of Peril series:

From the New York Times:
In the wake of Pearl Harbor, Benton decided to create gigantic propaganda pictures to be hung in Kansas City's Union Station. He wanted to jolt "the milling travelers" to comprehend the evils of fascism. Working at breakneck speed,
Benton within six weeks painted eight brutal works of unbridled violence that are collectively known as the "Year of Peril" series: the 8 titles- Starry Night; Again; Indifference; Casualty; The Sowers; The Harvest; Invasion; Exterminate! There's a slideshow of all the Year of Peril paintings, including brief explanation of content, at Mizzou Wire website HERE 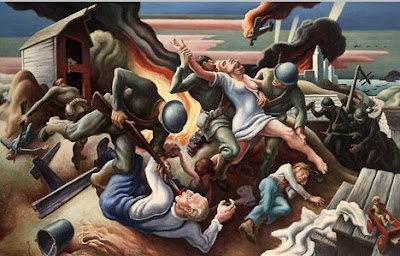 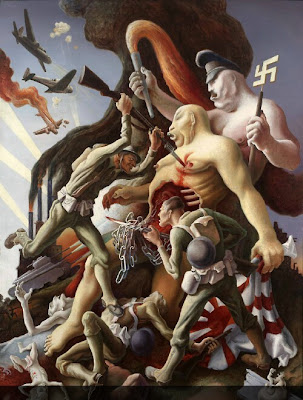 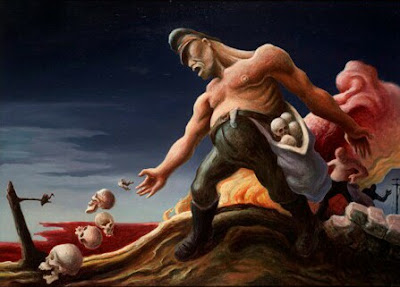 Gleaned from a variety of articles online I discovered that Thomas Hart Benton represented his natal chart rather well. Aries Sun & Mercury in opposition to Libra Moon and Uranus. (Chart is set for 12 noon, but Moon was in Libra whatever his time of birth by the way). His artistic talents are reflected in Venus (planet of the arts) found in its own sign Taurus, along with Mars (ruler of his natal Sun). 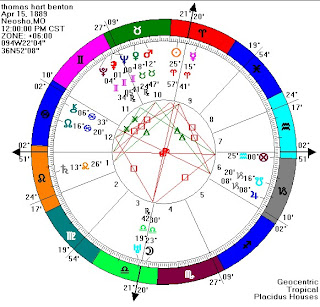 He was an amateur boxer in his youth and quick to fight back on many fronts in his later years- classic Aries-ness! In a review by Holland Cotter in the New York Times of Justin Wolff's biography of Benton, I found these paragraphs. I have highlighted lines which, for me, describe his Aries/Libra opposition:


Benton’s character, as depicted by Wolff at this point, will remain consistent: a combination of combative self-­confidence and profound uncertainty. In Paris, he played the roustabout bohemian to the hilt, wearing artsy clothes, acquiring a mistress, reading Ruskin and Hippo­lyte Taine, drinking all night, getting into fights. But his painting was shaky, as he tried out a range of styles — Impressionism, Pointillism, Cubism, abstraction, one after the other, often in combination — with dispiriting results. Whenever he felt he was on to something, he slapped himself down, in a self-destructive pattern that would take other forms later on. 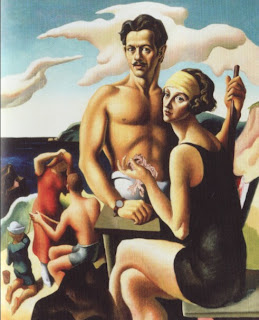 It would be hard to guess, for example, from a 1922 self-portrait by Benton in which he appears buff, bare-chested, Hollywood-­handsome and towering heroically over his wife, that he was about 5-foot-6 and had had to bat away “little man” taunts all his life. Nor would you know from photo­graphs of a scowling, proto-Stanley Ko­walski Pollock that he was a cripplingly self-doubting mama’s boy.

Leery of partisan ideology and ever sensitive to personal assault, real and imagined, Benton kept shifting his politics, from left to right and back, eventually hovering in a quasi-libertarian zone where, speaking in today’s terms, the Tea Party and Occupy Wall Street might meet. But then, everything about him was conflicted. He was an avid reader and writer who vilified intellectuals. He was critical of all centralized authority except his own autocratic theories of what art should or should not be. (It had to be rooted in social experience; it couldn’t float free, be about itself.) He condemned capitalism but decorated corporate walls and presidential libraries. He claimed that his work honored the average American, yet his murals are laced with satirical figures of working people.

The more out of fashion he became, the more he drew attention to himself through words. He couldn’t keep his mouth shut. In 1941, he was fired from his teaching position at the Kansas City Art Institute after describing the typical art museum as “a graveyard run by a pretty boy with delicate wrists and a swing in his gait.” And this homophobic slur was mild compared with others he made over the years.

Thomas Hart Benton in his own words:


"I have a sort of inner conviction that for all the possible limitations of my mind and the disturbing effects of my processes, for all the contradicting struggles and failures I have gone through, I have come to something that is in the image of America and the American people of my time. This conviction is in me pretty deeply. My American image is made up of what I have come across, of what was ‘there’ in the time of my experience- no more, no less."

just wanted to say HI as I havent been around much lately.

I'm starting to see a light at the end of the dark tunnel I've been in.

Sonny ~~~ Hi there! Oh - I do hope you'll soon be feeling better and reaching the end of whatever's causing you discomfort!

Spring's having a hard time getting started, but it must kick in properly soon - that'll help.
:-)

I learned of Benton in High School. Our teacher was a big fan so our class probably got a larger dose of him than most.

anyjazz ~ A teacher's enthusiasm for their subject really does have a long-lasting effect doesn't it?
Our art mistress wasn't enthusiastic about much, especially my artwork.
Our history mistress "Smokey Joe" was though - her teachings, and the red* overall she liked to wear, left a mark. ;-)