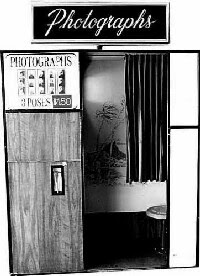 Among a recently acquired pile of old photographs bought by my husband at an antique store in Wichita Falls, Texas, just over the Red River from our Oklahoma hometown, were a few photobooth shots, probably dating from around the 1950s when photobooths first appeared on the scene. He posted one of these, enlarged, at Flickr the other day. One of his regular commenters pointed out that the two women in the photo might be none other than Gertrude Stein and Alice B. Toklas, in their later years. Goodness me! But why would these two luminaries of the 20th century Paris literary scene be posing in a photo booth? And how did their pic wind up in a wire basket full of old photos in a Texas store?

Compare the mystery photo my husband has with photographs of the two women available online. My husband's photobooth pic, enlarged, is immediately below; photos of Gertrude and Alice from Google Image follow. There is an uncanny resemblance. The fifth photo offers a view of the couple in their younger days. 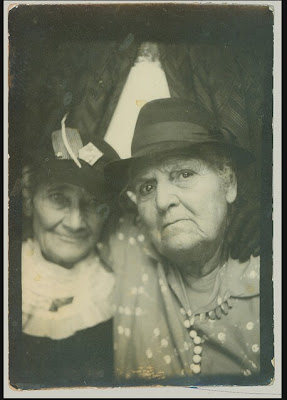 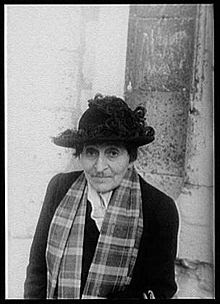 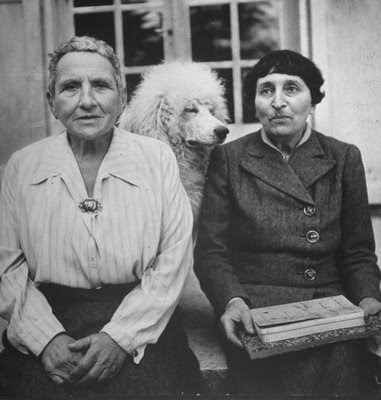 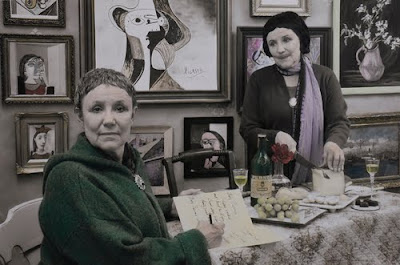 I was interested to find out more about the pair, who lived together gayly for most of their adult lives. Gertrude Stein was born on 3 February 1874. Alice B. Toklas - she of the recipe for whacky cannabis brownies - born 30 April 1877. Sun Aquarius and Sun Taurus? Sun sign astrologers wouldn't necessarily see that as a marriage made in heaven! In the case of Gertrude and Alice the link is clear - see the dual chart below. Gertrude's data is in the main chart with Alice's in the outer ring. 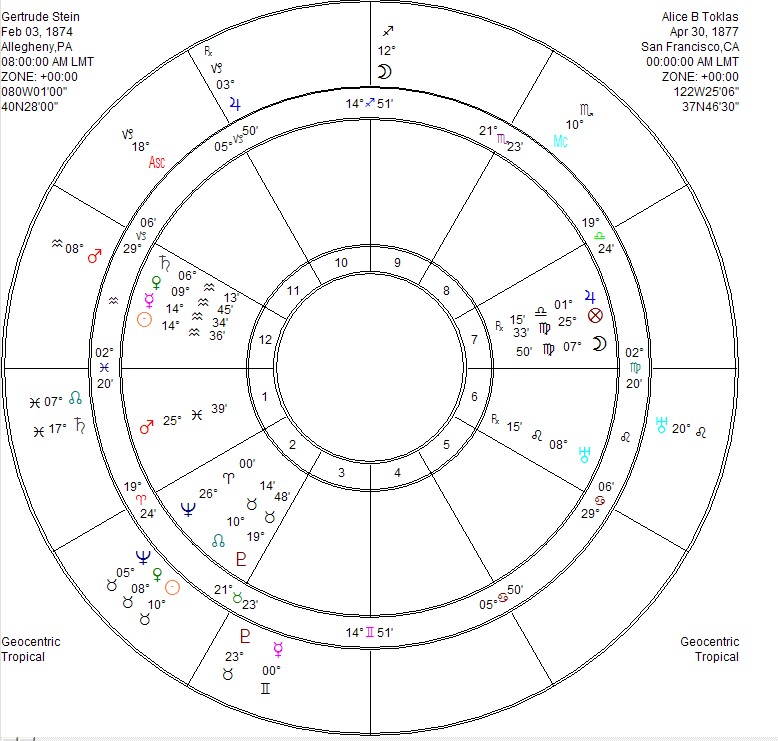 Alice's natal Mars at 8 Aquarius conjoins Gertrude's Saturn and Venus at 6 and 9 Aquarius, and more widely her Sun and Mercury at 14 Aquarius. Gertrude's North node of the Moon conjoin's Alice's natal Sun at 10 Taurus. Those are the main links I see. Astrodatabank's data gives Gertrude an 8 am birth time: Pisces rising, but no birth time is available for Alice, her rising sign remains a mystery. Alice's North node of the Moon was in Pisces, and quite close to Gertrude's ascending degree in Pisces.

What I discovered about Gertrude, from a quick read around the net, didn't endear her to me one little bit. From views of contemporaries stated HERE it appears she had quite an ego - verging on megalomania! Four personal planets in Aquarius could do that to a gal! Think Sarah Palin and add intellect.

Gertrude's politics veered well rightwards, she had no time for FDR and his New Deal. Her ethics were questionable too. She and Alice lived in occupied France throughout World War 2. A gay Jewish couple, they were just the types Hitler's minions were looking to send to prison camps, and likely death. They lived quite close to the Swiss border and could easily have de-camped for the duration. But Gertrude, it is said, collaborated with the Germans, the couple had protection of a German friend with influence in high places.

Stein and Toklas, both of Jewish descent, escaped persecution during World War II, due to both being known as Americans rather than Jews and the protection of Nazi collaborator Bernard Faÿ. Prior to World War II, she made a sarcastic statement in New York Times Magazine (May 6, 1934) that Adolf Hitler should be awarded the Nobel Peace Prize. "I say that Hitler ought to have the peace prize, because he is removing all the elements of contest and of struggle from Germany. By driving out the Jews and the democratic and Left element, he is driving out everything that conduces to activity. That means peace ... By suppressing Jews ... he was ending struggle in Germany." (See here).

Alice appears to have been the practical one of the pair, looking after their daily needs, staying in the background - the wind beneath Gertrude's wings, no doubt.

We'll never know whether the couple, out walking one day, decided to sample "one of those new fangled photo booths". Maybe they sent one pic from the strip of four to a friend in Texas.... whose estate, years later, included some old photographs.


FOOTNOTE & CREDIT: My husband's pet hobby, apart from listening to jazz and collecting records, is rescuing old photographs. Much of his collection can be seen at his Lost Gallery blog, it's a rather complex set-up so the Index Page is useful. He also posts photos regularly at his Flickr page.
Posted by Twilight at Saturday, July 02, 2011

Blimey - what a brilliantly weird find. Surely it is them!!

Good piece by the way.

Thanks for a nice share you have given to us with such an large collection of information. Great work you have done by sharing them to all. simply superb. Photo Recovery

Christina ~~~ Thank you!
Maybe it's them, maybe not - we'll never know for sure unless someone who does really know spots it here or on husband's pages.

Lise ~~~ Hi! Do you have reason for thinking it isn't Stein & Toklas? I realise it seems highly unlikely they'd be in a photobooth, but one never knows.
The resemblance of both - and the fact they're together is weird, if not them!

James Higham ~~ Well, I know only what I've gleaned from online sources.

Wikipedia says "Stein was politically conservative, though the nature of her opinions is
debated." She supported the pro-fascist Spanish Republican government, which was supported by the Nazis.

And, from a 1934 article:
Gertrude Stein in Paris: "Republicans are the only natural rulers in the country. When a Democrat gets in he only does so because of the singular seductiveness which he possesses. Cleveland had it and Wilson had it. Roosevelt was honestly elected, but he is not half as seductive as his predecessors.
http://www.time.com/time/magazine/article/0,9171,746809,00.html

Uncanny resemblance! I often browse your husband's photos. I find them fascinating.

I've been out of the loop for a while and am still endevouring to catch up on some blogging friends.

RJ Adams ~~~ hi there RJ! glad to see you and hope you're enjoying your new location. will pop over to yours in a while to see what's cookin'.

Yes, his old photos are fascinating peeps into the history of ordinary folks. :-)

Definitely it is them. Research should be done if you know where it came from...photographs were newer and they'd have done it as a lark.

That is definitely Alice B. Toklas if that's not Gertrude Stein with her it's definitely someone similar. They did tour 30 states including Texas in 1934 when Gertrude Stein's "autobiography of alice b. toklas " was published...but that would have made Gertrude Stein 60 at the time...she died a decade later...though she did at the time she was touring have the gray hair cut this way...It seems this is ten years later...however, first off, photo booths were in Paris and the US starting in the twenties, not the fifties...the surrealists in Paris apparently loved them when they came out and Gertrude Stein was around those people but this is later...and is this definitely in a photobooth and not a picture in front of curtained windows? Well, even so...perhaps they sent a photoshop picture to someone in Texas or Oklahoma they knew, or indeed, this was taken while they were on their book tour in 1934...it just seems these women are more likely 10 years older but there is one picture of them getting off an airplane for this tour and their physical features were close to this at that time, but not close enough to see how wrinkled Stein's face was by then.

Hmm not sure my posts are posting...but what I previously said was they were on a tour with The Alice B. Toklas Autobiography by Gertrude Stein in 1934.

Stein would have been 60 years old at that time, and they did tour 30 states including Texas.

Photobooths were in the US in the twenties as well as in Paris...so the 50s comment is wrong...there were photobooths at that time.

I am sure that is Alice B. Toklas, and if that's Gertrude Stein, if you look at the picture of them that exists getting off a plane in 1934, her hair and physique is like this as well but close up this looks like she'd be ten years older...

So perhaps this is indeed 1934 when they passed through Texas or they sent it to someone they knew in Texas in the forties and the picture was done in a French photobooth or it's a picture in front of a window???

The odds are it's them in any case there's no question that's Alice B. Toklas...the only way to know is to see some close ups of Stein in 1934 to see if she just aged badly and looked like this at 60 or if this is a picture of her, more likely at 70, and someone got this picture or they did another trip to the US that is recorded somewhere...but the fact is these two women definitely passed through Texas in a time when there were photobooths and Gertrude Stein was somewhat cross dressed in those years...it wouldn't have been strange if she were wearing this manly hat with a dress.

Fantasy Creature ~~~ Hi there! And many thanks for your thoughts on this photograph.

It is a photo booth pic for sure. My husband makes a point of collecting any old photo booth pics he finds - they're easy to recognise. What is shown here is an enlargement, so it looks more like a regular photo, the original is tiny in comparison.

The photo was in a large collection of old snaps and cabinet cards in an antique shop in Wichita Falls, North Texas.
Who knows how it reached that location!? Estate sales are often (almost always) the source - or the dealer had perhaps purchased or bartered the collection from another dealer possibly in another part of the states.

I think it's "them", due to the unlikely event of two such similar faces being found together. Only other explanation: two friends, possibly males, dressing up and impersonating Alice and Gertrude - but I can't see them doing this just for a photo booth pic, and in any case, why would they?

Thanks again for your thoughts. I'll pass them on to my husband.

Fantasy Creature - forgot to say - sorry you had trouble publishing - I have the blog set for moderation of comments on posts older than 3 or 4 days - just to avoid spammers coming in and posting on hundreds at a time.