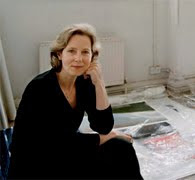 It's hard to understand why so few female painters have their work widely acclaimed. Offhand I can only offer Georgia O'Keeffe as example of an internationally instantly recognised artist. In the past I've featured Frida Kahlo, Grandma Moses, Beryl Cook, and a bunch of female illustrators of children's books. All those ladies achieved some level of fame in their own countries but none but is a household name on a par with Salvador Dali, Edward Hopper, Gustav Klimt, David Hockney and such. Where are the "big hitters"? Why haven't more females risen to the top of this pile? Male dominance is fairly understandable in some fields, but in this particular field, especially from mid-20th century on, it is really puzzling.

In the interests of balance, I searched around for female artists, known or little-known, to spotlight for the next week or two. First up, Lisa Milroy. She was born in Vancouver, Canada on 16 January 1959. I noticed one website (Answers) states 13 January, but I prefer to rely on The Royal Academy of Arts website

A look at examples of her art via Google Image (below) told me something right away: Saturn is playing a leading role here - regimentation, structure, practicalities. Her Sun in Saturn-ruled Capricorn fits this, but not sufficiently, there will be more. 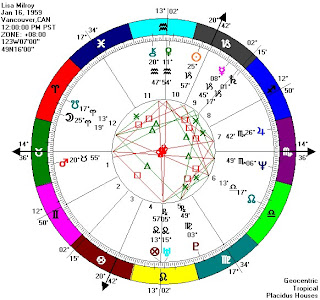 Saturn in her chart is conjunct Mercury (communication planet) and in Capricorn, its traditional domicile, so comes through in the personality louder and clearer than when placed in other signs.
Uranus (the unexpected) in Leo opposes Venus (planet of the arts) in Uranus's home sign Aquarius - a connection to the artist's rather unusual choice of subjects.

Extract from another Royal Academy of Arts page:

Her best-known pictures – the huge white canvases of immaculately painted geishas (so sharp in detail you think they must be holding their breath) or the grids of objects, such as shoes or drawer handles – celebrate life’s details with the passion of a taxonomist. Reproductions give an idea of the context of her works but only in the flesh can you see the sensuously worked textures that make them sing.

"life’s details with the passion of a taxonomist" translates as: Pluto (passion) in detail oriented Virgo, linked to Mercury/Saturn in Capricorn by harmonious trine.
(PS Wikipedia tells us that "Taxonomy is the practice and science of classification. The word finds its roots in the Greek τάξις, taxis (meaning 'order', 'arrangement') and νόμος, nomos ('law' or 'science')..... very Saturn!) 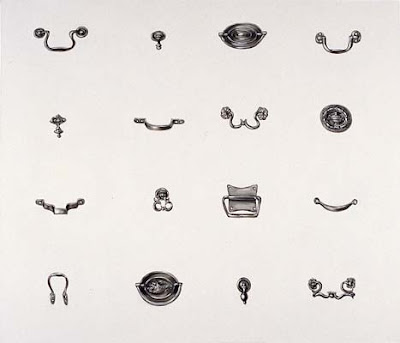 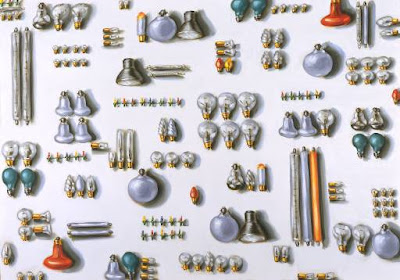 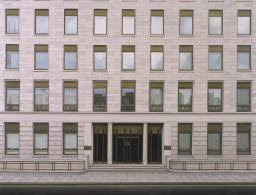 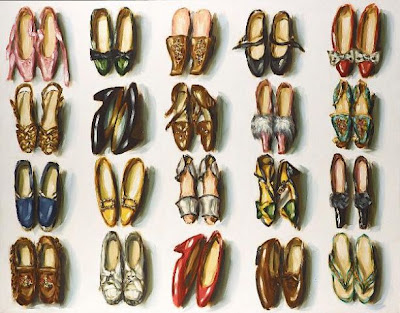 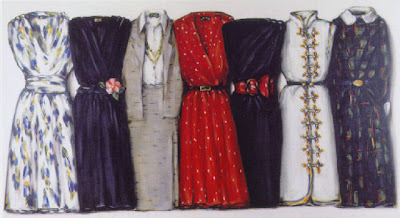 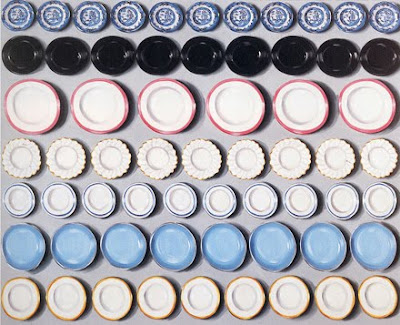 At the link above, the artist tells how, while searching for a new studio location she came to draw geishas:

Throughout her studio search Milroy felt a strong need to keep connected to painting. ‘It’s terrifying to let go of a studio, quite unnerving. To maintain a link, and also amuse myself, I began to make thumbnail sketches – in my A-Z and on estate agents’ handouts – of geishas that featured in the Japanese prints on which I had recently based some paintings. Soon these geishas morphed into a troupe of geishas of my own design and kept me company during my search. When I finally found my studio and moved in, the first paintings I made were of these geishas – they demanded it!’ Milroy visits Japan often: ‘It is the most visually engaging place I’ve ever been to, and the most foreign.’ 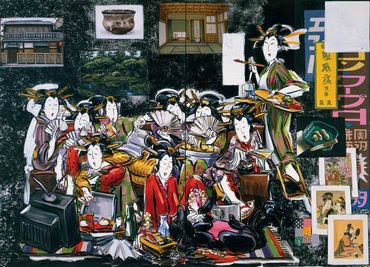 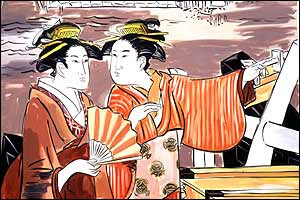 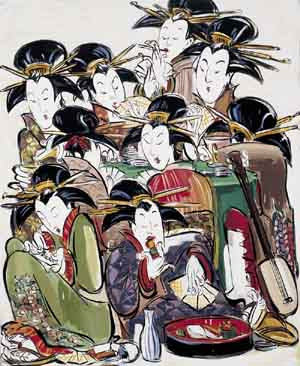 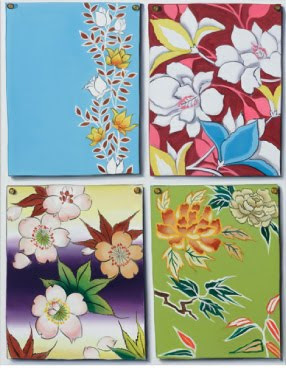 I love Milroy, T.
And to speculate on your question of why not more? I think nowadays prominence can be achieved but back then women's work was considered the 3Ks only and little or no respect were given to artistic merit. One only has to think of lace and embroidery which was the allowable expression and not honoured at all. (don't get me started, see? ;^)
I would offer you two for now: Emily Carr and Mary Pratt(her every day kitchen utensils are elevated to the level of sublime!), 2 artists of incredible vision.
XO
WWW

There are plenty of great women painters, at least they're known to painters like me. Just off the top of my head, I'd pick Susan Rothenberg and Joan Mitchell.

WWW ~~~ Thanks for thesuggestions, I'll investigate them for future posts.

Yes, until the 1960s or so there wasn't much chance of a female artist becoming famous unless she had "connections" - a famous brother, eg. Gwen John; a famous partner eg. Lee Krasner a wealthy parent....etc.

Perhaps it's just that nowadays with so many other media to entrance us, art isn't as likely to shoot a person or either gender to worldwide fame as it was back in the days before TV movies, computers, photoshop etc. etc. etc.

Charles ~~~ Oh, yes! I realise there are many talented women out there. It's just that there are hardly any who've achieved the worldwide name recognition that so many male artists have managed to do.

Thanks for the two names- I'll investigate for future use.
:-)