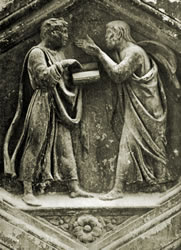 I gave up contributing to message boards when I began to write my blog regularly, but yesterday wandered into an old favourite forum and found a very interesting discussion, so I lurked. Later, a couple of links led me on to another discussion in a second, unrelated forum. Both discussions were on the topic of science and astrology, they impressed me so much that I decided to link to them here. Perhaps a passing reader might be interested.

The first discussion is at "TRIBE" on the Astronuts astrology section, in a thread called "Scientific Astrology". There's a follow-up thread called "Astrological Research". Of particular note are contributions by poster nicknamed Spock, who later reveals himself as astrologer Dale Huckeby. I'd read some of his articles before, but most are at least 10 years old. It's nice to see him still in action, I admire his ideas.

The second discussion is at the Bad Astronomy and Universe Today forum (BAUT) - most members there there are no allies of astrology! The thread is called "Science and Astrology". Poster, Robert Tulip, who originated the discussion, gallantly puts forward his views of, and support for, some areas of astrological doctrine. His steady, polite, extremely well-informed and painstaking replies are a joy to behold, some sneering on-line retorts are not. Eventually, by the end of the thread, which runs from last December to March, one or two other participants express grudging admiration for the way he has handled the argument, if not agreement with his views. It's a long read, but I found it well worthwhile.
Posted by Twilight at Saturday, April 07, 2007

Thanks for the link. It amazes me, how people STILL base all knowledge of astrology on the Sun sign they read in the paper, and use this (lack of) knowledge to debase it.

Yes, Chrispito - I think they do it to annoy! I think most of them DO realise there's more to it, but they just don't want to know. It would make for a much more difficult argument - and they're not that clever!

Just read the discussion on BAUT, this is academic writing on astrology! I learned new things and it was inspiring too. Also good to know that someone is taking the time to work on astrology at this level. To look at the Gaugelin tests that were good and take it from there why they were good. Thanks for providing the link.

Hi Miriam.
Yes, I agree. Glad you enjoyed the read.

Hello
Thank you so much for your kind comments on my BAUT discussion on astrology and science. I have just now discovered your blog which looks interesting! I generally find that my efforts to combine astrology, science, philosophy and theology succeed in irritating the adherents of all four areas of thought, so this is quite a long term project. It is an intriguing question of cultural philosophy why mainstream science is so furiously hostile to astrological thinking. People may be interested to see some of my papers at http://www.geocities.com/rtulip2005/Theology/ (I hope you can read my paper on the twelve jewels) and my MA thesis at www.geocities.com/rtulip2005/Tulip_Heidegger_MA
With Best Regards
Robert Tulip

Hello, Robert Tulip - what a nice surprise to "see" you!

Thanks for those links, I shall follow them up with interest, and try to include them in a blog entry soon. :-)

I have continued presenting astrological ideas on the Bad Astronomy website.

I hope you find these of some interest.