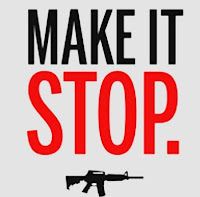 The usually peaceful town of Duncan, Oklahoma, where I've lived for 15 years, today has become part of the growing list of places where lack of sufficient gun control has taken its toll. According to reports, 3 people were fatally shot this morning at the Walmart store here.

Senator Chris Murphy, in 2012, wrote important words, quoted in full in my post HERE - including:

"None of this is inevitable. I know this because no other country endures this pace of mass carnage like America. It is uniquely and tragically American. As long as our nation chooses to flood the county with dangerous weapons and consciously let those weapons fall into the hands of dangerous people, these killings will not abate.

"As my colleagues go to sleep tonight, they need to think about whether the political support of the gun industry is worth the blood that flows endlessly onto the floors of American churches, elementary schools, movie theaters, and city streets. Ask yourself – how can you claim that you respect human life while choosing fealty to weapons-makers over support for measures favored by the vast majority of your constituents.

"My heart breaks for Sutherland Springs. Just like it still does for Las Vegas. And Orlando. And Charleston. And Aurora. And Blacksburg. And Newtown. Just like it does every night for Chicago. And New Orleans. And Baltimore. And Bridgeport. The terrifying fact is that no one is safe so long as Congress chooses to do absolutely nothing in the face of this epidemic. The time is now for Congress to shed its cowardly cover and do something."

It's appalling T and abundantly clear as to who owns the lawmakers, the congress and senate. Huge lobbyists, billionaires (an obscenity in itself as one good writer put it, having billions is obscene, how do they sleep at night?)

Even with Sandy Hook, these gun manufacturers didn't blink an eye or shed a tear but held more rallies with NRA members and extreme rightists and children keep dying in schools and walmarts, etc. And thousands of children have been massacred since. As one teenage survivor said last week, from a small child, he always knew there would be carnage in his school, he just wondered when. I found that so heartbreaking.

Wisewebwoman ~ Agreed! It turns out (not yet officially I think) that this shooting was not a random one as some have been, but involved an estranged husband shooting his wife and new boyfriend, in a car in the Walmart car park, then shooting himself. Still bad, of course, and tragic for friends and relatives of the deceased.

Dear god! It can't get much closer to home, could it? Wild horses couldn't drag me back to America. Which is probably true. They'd never be able to swim the distance ;-)

RJ Adams ~ although feeling very sorry for the victim, I was relieved to read that this was not a random event! We did have one of those a few years ago though. :-(