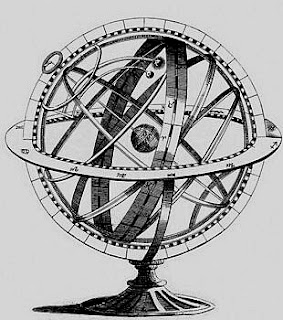 Reaching a clear conclusion about whether the sidereal or tropical zodiac gives more accurate results isn't easy. Using natal charts as a yardstick doesn't often provide sufficient difference, when the whole chart is considered. Using mundane astrology (how the world at large is affected) might prove more fruitful. Pluto, a far distant body interpreted by astrologers as representing transformation, often following a type of cleansing or upheaval, completes its cycle of areas of the 12 zodiac signs around the ecliptic in around 248 years. Pluto's transits provide a good focus point from which to get a bird's eye view of "atmospheres" on planet Earth as Pluto traversed each zodiac sign - using both tropical and sidereal calculations. Will transformations noted, transit by transit, more closely resemble the qualities of the tropical zodiac sign involved, or the sidereal ?

Hat-tip to Planet Waves for the diagram below: 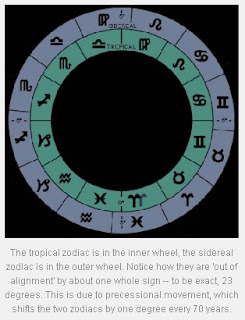 Many astrologers have written about the tropical "eras" of Pluto. There's a concise assessment by Adrian Ross Duncan HERE, for quick reference. I'll contrast those findings using sidereal calculation. It has to be borne in mind that the two other outer planets, Uranus and Neptune, also have their own "eras" and their own areas of relevance; their cycles vary from Pluto's, clear-cut indications of combined eras are questionable. I guess it'd be a matter of layering, and deciding which layer is the strongest influence at any given point of time.

Using extracts (in italics below) from Adrian Ross Duncan's linked article as a guide, I've added my notes on sidereal contrast in blue. Dates used may not be not exact to the month, I don't have a sidereal ephemeris for reference, and my mathematical ability is negligible!


TROPICAL
"The Pluto in Cancer period, from 1913 (just prior to World War 1) to 1939 (as World War 2 started) brought the upheaval of hierarchies and families, as a great levelling factor transformed society. Men in Europe were slaughtered in their millions in the initial phase of this transit, elevating the role of women and preparing the ground for the beginning of political equality. Similarly the privileged classes lost much of their influence – no more so of course than in Russia , where they were eradicated."

SIDEREAL
Pluto in sidereal Gemini covered the years between (approx.) 1908 to 1934, most of the same middle ground as above, with adjustment at start and finish. Without contradicting any of Mr. Duncan's tropical assessment, we could say that during the period of Pluto in sidereal Gemini, communication blossomed and was transformed in every way, from economical mass reproduction of magazines, illustration, and books, to the rise and mass production of the automobile, a very important development, enabling wider travel and, consequently, transforming communication and life in general..

This is rather like looking into a multiple-sided mirror in a clothing store's changing room: look straight ahead and you see one view, turn to a mirror at the side or behind, and see a different version, equally valid.

TROPICAL
"Pluto in Leo from 1939 to 1957/8 brought the rise of the superpower, based on the destructive power of the bomb. Schoolchildren practiced hiding under their desks, as the spectre of intercontinental ballistic missiles brought the possibility of destruction to each individual on earth. On the other hand this was the time when colonial powers lost their power, as individual countries asserted their right to be independent. The Pluto in Leo generation is obsessed with youth and self-indulgence. This first generation to grow up under the shadow of the bomb was the first to confront the fact that humanity really could be destroyed, that Armageddon could be a reality, and therefore they seized life with all their power."

SIDEREAL
Pluto in sidereal Cancer covered years 1934 to 1954/5, again the same middle-ground with adjustment at both ends. World War 2 is the most important, transforming, event included in both eras. I could argue that during this time Pluto radically transformed the home (represented by Cancer). Children were left without fathers for years, sometimes for ever. As Mr.Duncan mentioned, children "hid under desks". The whole population of my homeland, Britain, hid at some point during the war in bomb shelters. Hiding in fear under a tough protective layer brings Cancer the Crab clearly to mind! There was an abiding fear that life in the home would be forever transformed in a disastrous way, stripped of freedom and all warmth. Because of heroic action by military forces from Britain, Europe and the USA , mercifully this didn't happen. Towards the end of this period, home-life resumed for those lucky enough to have survived. For most, wherever they lived, a transformation of some kind had occurred.

TROPICAL
"Pluto in Virgo from 1957 to 1971/2 brought the transformation of work, medicine, agriculture and the service industry. With the introduction of the first computerised robots, employees performing nightmarish tasks in heavy industry were released (into traumatic unemployment) and service industries began their rise. Farms became automated, pigs and chickens became production units, so we could have egg and bacon every day. The Pill enabled women to gain control over their biology – sex was on the rise, but, for the first time, birth rates started falling. Pluto has its own medical solution to the so-called population explosion."

SIDEREAL
I find that Pluto in sidereal Leo from around 1954/5 to the end of the 1960s much better describes the period than Pluto in tropical Virgo. It was as though the sun (Leo) had begun to shine once again after the dark years of fear, depression and war. The youth of Europe and America found a voice, and in the 1960s we heard it loud and clear. The hippie era seems now almost like a stage musical (very Leo), the fashions and fads, even the long manes of hair common at that time seem to me to fit Leo's image far better than Virgo's.


Thus far, I think an argument could be made for both tropical and sidereal viewpoints. One could cherry-pick items from any era to support almost any argument though, and there's the problem of mixed influences from Uranus and Neptune to consider. It's a matter of how we each see the overall flavour of a particular, well-defined era.

TROPICAL
"For those to whom marriage was sacred, Pluto had a very special surprise when in transited Libra from 1971 to 1983/4. Aesthetics and femininity were transformed, as bras were burned, and equal rights insisted on. Roles were reversed as men renounced masculinity, and women demonstrated that they could manage very well without the opposite sex. Men loved men, and women loved women – leaving the Pluto in Libra children to ponder about love and relationships... and to create the single culture of today. This was the era of MAD – mutually assured destruction – the nuclear balance of power between the Soviet Union and USA . "

SIDEREAL
Sidereally Pluto was in Virgo for much of the same period as above, actual sidereal period was nearer to 1969 - 1980. The overall feel of that era certainly included the beginnings of equality for women and gays in Europe and the USA. Britain had its first woman Prime Minister, Margaret Thatcher. Virgo is represented traditionally by a female figure, so symbolically there is a correspondence here, in the slowly moving transformation relating to gender equality and perception. There was an energy crisis, too, requiring restrictions and rationing, and in Britain strikes cost millions of working days. In the USA Richard Nixon rose and fell ignominiously, perhaps causing a transformation in the way Americans were to view their leaders in future years - more critically, with less passivity. The aftermath of the Vietnam war left many injured, mentally and physically. These instances equate more to transformation in Virgo's realms of economy, critical reaction and health concerns than to Libran diplomacy, and emphasis on relationships, in my view. And the beginnings of environmental awareness arose in this era - in 1970 the first Earth Day was celebrated - in keeping with Virgo, an Earth sign.


TROPICAL
"After so much sexual experimentation, Pluto in Scorpio from 1983 to 1995 brought the spectre of AIDS. Now even the most natural act in the world could result in death. Back in its home sign, Pluto focussed paranoia on sex itself, and this led to a drastic change in sexual habits, not least in a new openness amongst governments regarding sexual health. Condoms were everywhere. Economically this was the time of the yuppie, of junk bonds and how to get rich by screwing others – happy times for Reaganites and Thatcherites. Banks crashed, then merged to create huge financial entities."

SIDEREAL
Roughly the same era (give or take a few years at each end) is covered by sidereal Libra.
Fall of the Berlin Wall, Tiananmen Square protests of 1989 in China, a gradual transition into the computer age, the Reagan era in the USA. These could all connect to Libra rather than Scorpio, in my view. Libra, an Air sign, symbolised by the scales, representing balance, a striving for justice, love of peace. Libra is an Air sign, with mental focus, aiding transition into an increasingly computerised era. Pluto in Libra could be seen to relate to all of these.


TROPICAL
"Pluto in Sagittarius from 1995 to 2008 has of course evoked the spectre of international terror and religious fundamentalism. As a mutable sign Sagittarius creates polarity, and today we have the idea of a war of civilizations. The root cause of terror is probably injustice, which Pluto in Sagittarius seeks to redress by its own methods, but the terror of Muslim extremists is also about fighting the Great Satan of America, and the sexual flagrancy and material indulgence of the West... a last-ditch attempt to save an outdated worldview."

SIDEREAL
Not exactly the same period - actually around 1993 to 2006, Pluto lay in sidereal Scorpio. The over-riding aspect of this period was terrorism, as mentioned in the tropical assessment, terrorism and the Iraq war/occupation. As I see it, terrorism equates more to the passion and fixedness of Scorpio, ruled by Mars and Pluto, than the extremes and expansiveness of Sagittarius, ruled by benign Jupiter. Let's not forget that Pluto is very much at home in Scorpio. It's possible, though, to view this from both perspectives.

I don't see a clear overall bias to either tropical or sidereal, past or the present. That could be partly because the two zodiacs do run in tandem for part of the time, so in taking a bird's eye, long distance, view there's bound to be a blending of the qualities and traits of the two signs involved. So this exercise didn't really clarify things any more than does comparing sidereal and tropical natal charts. Any thoughts?
Posted by Twilight at Tuesday, March 12, 2013