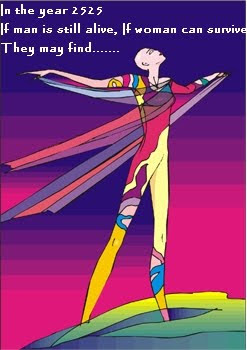 Surfing through YouTube videos the other day, I found an old favourite song - In the Year 2525 by Zager & Evans. The song had been constantly running through my head, probably as a result of my previous post. 2525 is the most sci-fi song I know of.

Whatever happened to Zager & Evans ?
Denny Zager and Rick Evans, two lads from Nebraska who, after singing and playing with a 1960s pop group The Eccentrics, formed a duo in 1968: Zager & Evans. Rick Evans wrote, in half an hour the story goes, their memorable and only number one hit, In the Year 2525, carrying the rather pretentious sub-title Exordium and Terminus. Translation = something along the lines of beginning & ending. The song was written in 1964 but not widely released until 1969. Their subsequent work didn't take off in the same way though, and the duo eventually split up. Both guys remain in the music business - Evans continuing to perform and write, Zager now teaches guitar and sells modified guitars and lessons, on-line.

In the Year 2525 could be described as a sci-fi short story set to music, telling how humans may face a future fraught with danger arising from their own insistent hunger for progress and invention, hoist by their own petard as it were: technology and greed, using the Earth without putting anything back. Sound familiar in 2010?

Lyrics are shown below. The song was not universally popular however. It features in several "Worst Song" lists. I suspect the compilers of such lists do not appreciate the imaginative, if gloomy, science fiction aspect, but I bet sci fi addicts loved it from the start.

I wasn't a bit surprised to see what natal charts for Zager and Evans contained. Aquarius, of course, and Grand Trines in Air linking Mercury, Neptune and Uranus.

Denny Zager born 18 February 1943 in Wymore, Nebraska (UPDATE: See Comment section - a reader has pointed out that birth date given at Wikipedia is incorrect and Denny was born 15 February. The main point, that Aquarius links the two guys remains, but new chart has been added at end of post.) 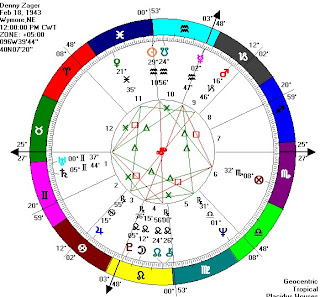 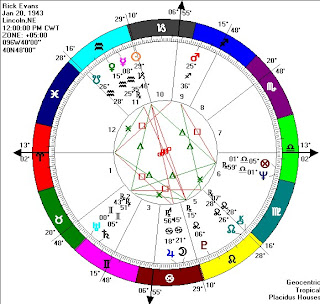 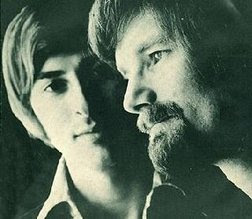 I can find no times of birth. In a 12 noon chart Rick Evan's natal Sun is at 29.46 Capricorn, but by 6:00PM-ish Sun had moved to 00 Aquarius. I'd wager he was born later rather than earlier in the day. In any case, though, Evans has Mercury and Venus in Aquarius. Zager has Sun in the last degree of Aquarius, whatever his time of birth, as well as Mercury in Aquarius. 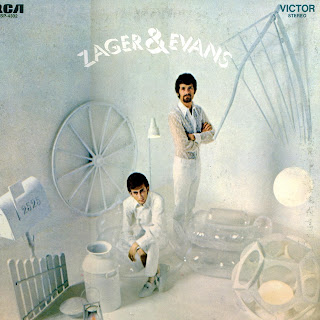 Both guys have a lovely Airy Grand trine linking Aquarius's ruler Uranus in Gemini to Neptune in Libra and Mercury in Aquarius. Mercury=communication and writing; Uranus = all that's futuristic; Neptune = creativity and imagination. The Air signs tend to live in their minds, all need constant mental stimulation, often finding it by engaging in research, writing or other forms of communication.


Astrology is showing itself here. Borrowing from The A Team (again): "I love it when a plan comes together!!" 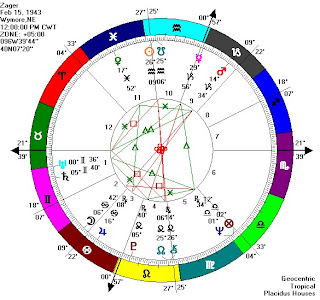 Song lyrics, and a couple of videos follow. The first video has had images added from a variety of sources. The second video features the duo singing their only hit song.

In the year 3535
Ain't gonna need to tell the truth, tell no lies
Everything you think, do, and say
Is in the pill you took today

In the year 4545
Ain't gonna need your teeth, won't need your eyes
You won't find a thing chew
Nobody's gonna look at you

In the year 6565
Ain't gonna need no husband, won't need no wife
You'll pick your son, pick your daughter too
From the bottom of a long glass tube

Now it's been 10,000 years
Man has cried a billion tears
For what he never knew
Now man's reign is through
But through the eternal night
The twinkling of starlight
So very far away
Maybe it's only yesterday

I think they allowed us far too much time to implode but given that, I always liked the song but would have accelerated the time frame!
XO
WWW

WWW ~~~ Glad you remember the song. -Agreed, their time frame was over-the-top optimistic. :-)

A message to the blogger "Twilight" of the Ecliptic(and anyone else out there) Denny Zager's ACTUAL birthdate is:-- February.15, 1943 NOT Feb.18 as Wikipedia states - they have the WRONG birthdate (would that change the astrological chart that is posted?). I know his real B.D. - I asked Denny myself & for anyone interested his website is at: www.zagerguitar.com & he sells fantastic easy to play guitars as well as his fingerstyle method of playing guitar. By the way I am the poster of the 2nd video on YOUTUBE. I hope this clears up some misinformation. By the way I really enjoy your blog. Thanks :) olgamarie888

olgamarie888 ~~~ Hi there!
I'm grateful for the information on Denny's birth date. Thank you so much for taking the time to comment letting me know of the error.

I will correct the post and add a new chart. For my purposes the change of date will not make much difference, as Denny's Sun will still be in Aquarius, 3 degrees back from where it lay on 18 Feb. Mercury on 15 Feb was still in Capricorn though, so a touch of common sense business-savvyness is added to Denny's Aquarian traits. Moon is likely in Cancer rather than Leo - could even be in late Gemini, but without a time of birth it's not possible to say.

The Aquarius link between Zager and Evans, which I found to be significant in relation to their hit song, remains.