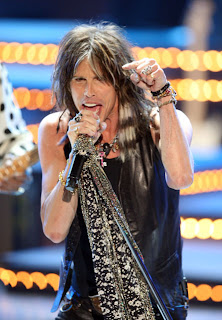 Steven Tyler personifies the rock of previous decades. His striking facial likeness to Mick Jagger was no doubt a bit of help in the early days of Aerosmith, the band he used to front. It was his high energy performance that kept the band top-rated for decades though. He has an outlandish yet stylish dress sense, uses mic stand adorned with scarves as his trademark, as well as an intimate dance technique with said mic stand - sometimes seen as scandalous by those of more delicate sensitivities. A showman!

Two things piqued my interest in Steven Tyler: a TV appearance, on the Kennedy Center Honors show, when he sang in tribute to honoree Paul McCartney; and news that he'll be one of the three judges in the 2011 season of American Idol shows. Whether he will take over Simon Cowell's "Mr. Nasty" slot remains to be seen. I cannot pretend to be a mine of information about Tyler. Apart from a liking for Aerosmith's I Don't Want To Miss a Thing, one of the band's hit songs, I know only what Google can offer - along with information thrown up by his natal chart.

Rob Sheffield at Rolling Stone is not optimistic about Tyler's upcoming stint on American Idol :

"I mean, this is the guy who sang the National Anthem at the Indy 500 a few years ago, and decided it would be a hoot to change the words. He was lucky to get out of there with his hide intact, but it was a classic Steven Tyler moment. If you've ever had the pleasure of interviewing this great man, you know that part of his brilliance is that he has no attention span — his brain zooms from topic to topic, as he jabbers entire paragraphs of surrealist prose poetry, defying you to guess what the hell he's talking about. But now the plan is for him to concentrate on the same topic for an hour at a time, two nights a week, on live TV? Gosh, what could go wrong?".........................Last year, when Aerosmith were said to be breaking up, how did Tyler respond to the controversy? A well-thought-out public statement? A gesture of solidarity with his long-suffering bandmates? Ah, no. He opted to show up unannounced at a Joe Perry gig, crash the stage for "Walk This Way," make a dumb joke ("I am the rainbow!") and disappear. The team-player software was never installed on this man's hard drive. His specialty, as he put it in "Toys in the Attic," is: "Leaving the things that are real, behiiiiiiind!" 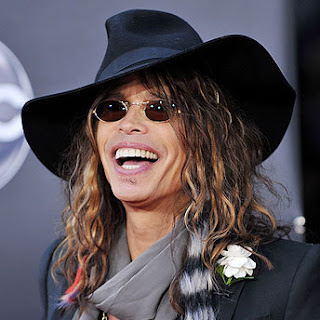 He comes from a very mixed background: Italian/German from his father, a classical musician; Cherokee and Ukranian descent from his mother's side. He got into music - and trouble - early on, was expelled from high school for drug use as a prelude to future drug and alcohol abuse, leading to Hepatitis C, long periods of treatment and periodic rehab.

A number of other legendary rock singers were born 1948: Ozzy Osbourne, Robert Plant, Ted Nugent, and Alice Cooper among them. Anything going on that year - any astro-atmosphere conducive to hard rock? 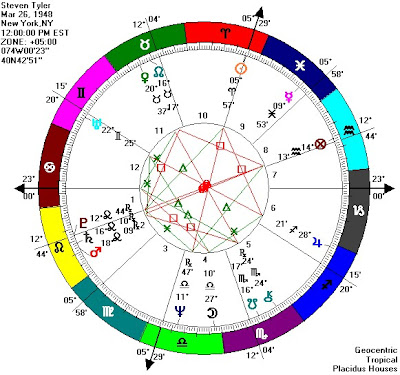 The outer, slow-moving generational planets are where to look for all-round "atmosphere". In 1948 Pluto and Saturn (2 "hard" planets for sure) were very close together, conjoined for most of the year in Leo sign of the showman, and in Tyler's case Mars (energy and drive) joined the pair making a powerful threesome.
This powerhouse lay in harmonious trine to Tyler's natal Aries Sun, and in a somewhat wider but still significant wider trine to Jupiter in Sagittarius. Aries, sign of impatience, impulsiveness, courage and boundless energy from its ruler, Mars.
Jupiter in Sagittarius adds excess to that already overwhelming mix of Fiery power. 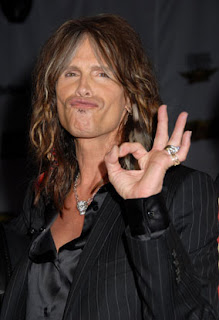 Two quotes from Steven Tyler which so well reflect Sun in Aries and Jupiter in Sagittarius:

"The things that come to those that wait may be the things left by those that got there first."

"We believed anything worth doing was worth over-doing"

How is such a Fiery power-house involved in music though? We have to look to Venus, planet of the arts, and find it in Taurus the sign it rules, in helpful sextile to Mercury (communication) in imaginative Pisces. Tyler's songwriting abilites are reflected here as well as his singing talent.

With no information as to his time of birth, ascendant and Moon signs remain unknown. Moon could be in either late Libra or, if he was born after 5:00PM, in early Scorpio. I'd bet, though warily, on Libra, in spite of the sexy (Scorpio) image Tyler courts. Libra is another sign ruled by Venus. His flair for style and dress-up speaks of Libra, I think. Ascending sign is anyone's guess. It wouldn't be a surprise to me to find Uranus (the rebel) close to the ascendant angle though, with Gemini rising. His build is pure Gemini - gangling, bony, skinny, his style Uranian: outlandish, eccentric. Another of his reported quotes has Uranus at its heart:

"I have always said I would rather grow up wrong than being right in someone else's eyes."

A good selection of photographs of Steven Tyler appear as background to this video: Aerosmith & Steven Tyler with I Don't Want To Miss A Thing. The song was written by Diane Warren.
Posted by Twilight at Monday, January 03, 2011

Interestingly enough CBC did a minor cameo on him recently, highlighting his ego and his adulation of Mick.
I find his face rather disturbing these days, too much of the nip and tuck rendering him rather grotesque.
XO
WWW

WWW ~~~ Oh really? Maybe due to his upcoming debut on Am.Idol - his name will come to the fore in entertainment news again after a time in the doldrums.

He had one of those ugly-beautiful faces when younger, I think. Messing with it might not have been a good idea. From his performance at the Kennedy Center show his voice (at least) has held up very well - I was impressed!

I read some dumb comments here about Steven's face. Age changes people too, not just surgery...and he is certainly not bad or strange looking. Anyone saying that is simply a dumb-ass.
He's unique looking. Can't handle that ? That's YOUR problem.

anonymous ~~ There's one comment only referring to Steven's appearance. There are other posts which mention him and as far as I recall no further mention of it.

I could refer your own comment back to you
"If you can't handle that - your problem".

I've grown to respect and like Tyler immensely since seeing him on American Idol. His appearance, which I happen to like by the way, is secondary to his personality.